In Ho Chi Minh City, a single block of sidewalk can offer parking for motorbikes, a venue for a funeral service, seating for cafes, retail space for vendors, a thoroughfare for pedestrians and a haven for nappers in lawn chairs.

This vibrant public space forms the heart of USC Price School of Public Policy Associate Professor Annette Kim’s traveling exhibition, In Celebration of Outdoor Activity Culture, which opened at the Massachusetts Institute of Technology in Cambridge, Mass., in September and in Ho Chi Minh City this month — and will eventually move to Los Angeles.

The exhibition forms part of the public engagement efforts of USC Price’s new spatial analysis lab founded and directed by Kim. The lab aims to advance the visualization of the social sciences for public service through research and education.

In Celebration of Outdoor Activity Culture in Ho Chi Minh City features 18 photographs of everyday sidewalk life and two digital video installations, one of which maps how a neighborhood renegotiated the sharing of its alley multiple times over a 10-year period. Kim could not use the word “sidewalk” or feature certain maps in the exhibition due to censorship because sidewalks and street vending have become politically sensitive in Vietnam.

The exhibition attracted a slew of press coverage on Vietnamese television, radio and the front page of the Sunday edition of Vietnam’s largest newspaper Tuoi Tre. An online documentary about the exhibition is also in the works.

Raised in Southern California, Kim first arrived in Ho Chi Minh City as a doctoral student in 1996. As an assistant for a professor’s consulting project, she knocked on every third door to conduct a household survey. She returned to the city in many times, including as a Fulbright scholar in 2000-2001 for doctoral dissertation fieldwork.   Kim now studies the city’s sidewalks — which she calls “collaborative, humane and beautiful” — with help from Le Nguyen Huong Giang, a local architect and former staff member in the city’s Department of Planning and Architecture.

“My most surprising finding was the amount of social trust and cooperation happening on the sidewalks,” Kim said. “The social system supports multiple people sharing the space, taking turns.” 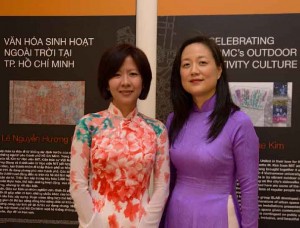 During interviews, many sidewalk vendors have told Kim how homeowners and shopkeepers give them free water and electricity, store their goods for them overnight for a small fee and hide them during police raids. These homeowners and shopkeepers understand that the sidewalk vendors need to make a living, sell useful products and contribute to keeping the sidewalk free from litter.

Vendors also cooperate with each other, sharing space and the costs of plastic chairs and tables for customers.

Some scholars estimate that the “sidewalk economy” employs 30 percent of labor and provides about 30 percent of the local food supply in Vietnam. Kim pointed out that it also has value in promoting social cohesion by bringing together people from a range of income levels and in attracting tourists.

“Ho Chi Minh City’s vibrant urbanism has a lot to teach the world, and it mostly takes place on the sidewalk,” Kim said. “Rapidly growing cities around the world are grappling with how to plan and manage public space when so many people are migrating to urban centers and cities are becoming denser than ever. In Ho Chi Minh City, we see that public space has many more possibilities if there is a social system to support sharing it.”