We all know the speech.

The words. The rhythms. And, we tell ourselves, the meaning.

Martin Luther King’s “I Have a Dream” speech still remains a moving call for equality 50 years after he delivered the speech at the Lincoln Memorial. But the passing decades may have dulled some memories about the events that prompted his words.

That’s why Erik Loyer, creative director for the USC School of Cinematic Arts’ Alliance for Networking Visual Culture, jumped at the chance to present the speech in a fresh way. 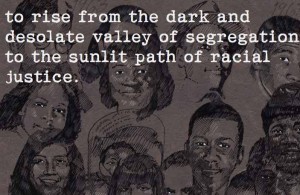 “Freedom’s Ring” allows viewers to scroll through the “I Have a Dream” speech while learning about its history and context.

Using a USC-created digital platform called Scalar, Loyer helped develop “Freedom’s Ring,” an “animated mural” that allows viewers to scroll through the speech while learning about its history and context. Viewers can move phrase by phrase, see where King broke away from the written text and guess at why. Loyer, along with USC’s Tara McPherson and others, designed Scalar  to give academics new tools beyond the publication of scholarly papers. It’s as accessible as blogging and opens scholarly research to non-academic audiences.

It helped turn the speech into a living, breathing experience.

“It’s a legendary speech,” Loyer said. “Everyone is so familiar with it that it’s become kind of a cliché. It’s great to dig into something you think you know, but maybe don’t really know.”

Loyer has worked with Scalar before. He did the design and programming for “The Knotted Line,” a project by artist Evan Bissell exploring freedom and confinement in American history. Stanford University’s Martin Luther King Jr. Research and Education Institute took notice, contacting Bissell in hopes of a collaboration.

The animated mural concept was Bissell’s idea, Loyer said, and they worked together to develop it over the course of almost a year — finishing in August 2013, just in time for the 50th anniversary of the speech’s delivery.

Loyer said working on the design and programming of the project also gave him the opportunity to appreciate the speech in new ways. In 1963, the speech wasn’t universally beloved; it represented King’s point of view, Loyer said, though there were others in the Civil Rights movement who felt it wasn’t strident enough. In fact, more than three years later, King’s frustration with the movement’s progress led him to refer to his dream as having become “a nightmare.”

King made numerous changes from the original, written speech, something the King Institute was keen to highlight in the project. Loyer said the end, in particular, reveals a sharp departure. Entire portions were struck out.

“Being able to really see that in a simple way, the items crossed out and remaining, gives the reader a sense of this swirling combination of elements that came together in this remarkable moment,” Loyer said.

Is it a horror film or a rom-com? AI can predict based solely on music

USC Viterbi’s Shrikanth Narayanan and his research group examined the role of music in film through a computational lens to determine how it affects the audience’s perception of genre.