For Annalisa Enrile, the devastation that Category 5 Typhoon Haiyan wreaked on the Philippines was personal.

As a clinical associate professor at the USC School of Social Work, Enrile had visited Tacloban City in 2007 while leading a global immersion program for the school. She stayed as a houseguest in a humble dwelling with a poor but very hospitable family. She ate with them and played with their children, grateful for their generosity.

“When Typhoon Haiyan struck on Nov. 8 and the first images of a ravaged Tacloban were released, I knew instantly that the remnants of the proud, hard-working community where we had stayed was what I was looking at,” Enrile said.

So Enrile, a Filipina American with a strong background in community organizing, and a group of School of Social Work faculty and alumni formed a delegation to travel to the affected areas of the Philippines, namely the islands of Leyte and Samar. From Dec. 14 to 22, this group offered trauma response training to local social service organizations, many of which Enrile had previously worked with through her study abroad efforts, as well as hands-on assistance in the hardest-hit areas.

“Looking at orphans, grief and loss, it’s unfortunate, but it’s not something that’s being done by any of the international groups that are going in. Most groups are focused on the physical aspects,” said Marleen Wong, a clinical professor at the School of Social Work and an expert in crisis intervention and trauma response, who accompanied Enrile to the Philippines.

Typhoon Haiyan, known as Typhoon Yolanda in the Philippines, is the deadliest typhoon on record to hit the country, where more than 6,000 people were killed. According to United Nations officials, about 11 million people have been affected, and many have been left homeless. The city administrator for Tacloban said that 90 percent of the city has been destroyed.

“We wanted to do work in a way that was empowering, not just parachuting in as Americans to provide relief and services and then leave,” Enrile said. “So we identified organizations that had the mission and desire to provide services but didn’t necessarily have this kind of information or training. We wanted to create partnerships.” 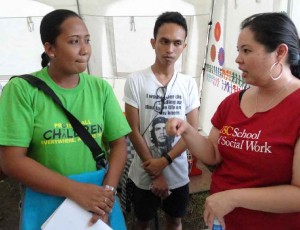 Because of the reach of the Trojan Family, the USC team was able to connect with prominent alumni, including Brian Goldbeck ’85, deputy chief of mission for the U.S. Embassy in Manila, and Wilfred “Fred” Uytengsu, ’83, president and CEO of Alaska Milk Corp., the leading publicly listed consumer foods company in the Philippines, who donated $8 million in 2012 to fund the USC Uytengsu Aquatics Center.

Goldbeck and Uytengsu put together a briefing for the group with the heads of United Nations relief efforts and the U.S. Agency for International Development responsible for Southeast Asia to get a feel for the cultural sensitivities involved in the disaster recovery.

The USC group also was able to get leaders from many facets of Philippine society to attend its training. Representatives from the vice president’s office, department of education, department of social welfare and development, senators’ offices, mayors, large foundations, churches, and grass roots groups and service providers committed to the multi-day training, which took place just days before Christmas — no small feat, given that the majority of Filipinos is Catholic.

The USC social workers also experienced what it was like on the ground by visiting tent cities, schools and evacuation centers. Benedictine nuns served as guides, helping them understand the effects of the devastation and talk to people affected by the typhoon.

Going forward, Enrile, Wong and the rest of the USC team would like to continue aiding in the recovery efforts, including offering further training on more specialized topics, such as preventing child sexual trafficking, community safety and security, and other evidenced-based interventions.

“The people we worked with had never experienced this type of framework — us sharing our expertise without wanting anything in return,” Enrile said. “We wanted to build their capacity for the long recovery and acknowledge that there is this capacity; they just need access to the knowledge and partnerships that they usually don’t have access to.”

To view more photos from the mission, go here.