Growing up in Wayne, N.J., Geraldine Knatz MS ’77, PhD ’79 loved nothing more than going crabbing with her family on the Jersey Shore. Until, heading home one summer evening, she was overcome by remorse. Insisting her father turn around, she made him drive back to the beach.

“He was annoyed,” Knatz said. “He didn’t like having to get off the parkway and pay extra tolls to go back, all because I wanted to let my crabs go. We quit crabbing after that, but that moment was the start of me.”

Knatz was in junior high by then and often watched French underwater explorer Jacques Cousteau on TV. She also had a laboratory set up in the family’s basement, where her older brother played with his chemistry set.

“My brother used to blow stuff up down there, but then he lost interest and I started using the laboratory to look through a microscope at pond water. That’s when I become more aware of life. Other life.”

Fast forward to 2005 and Knatz — who earned a master’s in environmental engineering from the USC Viterbi School of Engineering and a doctorate in biological sciences from the USC Dornsife College of Letters, Arts and Sciences — had risen through the ranks at the Port of Long Beach to the No. 2 position. She oversaw a $2.3 billion capital improvement program and had spearheaded a number of environmental initiatives, including development of the Green Port Policy. She was already serving as chair of the International Association of Ports and Harbors’ Port Environment Committee when she was offered the top job at the Port of Los Angeles, the nation’s busiest container port.

Encompassing 7,500 acres on 43 miles of waterfront, the port handled more than $273 billion in cargo last year and is responsible for three million jobs.

“I think what was even more significant about my appointment than the fact I’m a woman was that I did not have the traditional background for a port director,” she reflected.

It was Knatz’s science background that made her the top choice for the post and gave her credibility with the organizations she and her team needed to work with to solve the port’s environmental problems, she said.

“My focus had always been on how to keep the port growing and retaining our No. 1 status,” she said.

When Knatz took over in January 2006, capital improvement programs had ground to a halt, largely due to community opposition to port expansion and litigation over environmental issues. Most lawsuits focused on health issues associated with the use of diesel fuel, the primary equipment fuel at the port.

“Scientific research — some done at USC — linked diesel exhaust to certain cancers,” Knatz said. “People were coming to public hearings holding up maps showing the port was a hot spot.

“We have 900,000 jobs in the Southland that are connected to this port, and all those people are relying on us to do our job. And we couldn’t do it in the face of community opposition. When you have a board of policymakers appointed by the mayor, you can’t go to them and say, ‘We want you to approve this project, and oh, by the way, there’s going to be 200 additional cancer cases associated with that.’ ”

Knatz found herself devoting 50 percent of her time to environmental issues to achieve any growth.

“Our first goal was to reduce health impacts, clean up the port and not put any project up for approval that would cause an additional increase in cancer risk. We set a stretch goal to reduce air emissions by 45 percent from all sources in five years.” 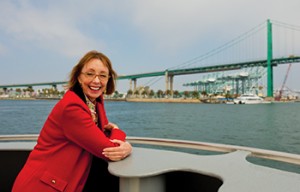 Unafraid to adopt controversial and far-reaching methods, Knatz took a multi pronged approach by taking on the aging truck fleet and pioneering the use of shore-side electrical power for ships.

“We said, ‘We have problems. This port is a great laboratory. If you’ve got an idea and we think it could help, we’ll invest in your business.’ ”

“I am proud of the many accomplishments that our team made at the Port of Los Angeles during my tenure,” she said of her impending departure.

Knatz’s passion for the port is clear. Her office has a panoramic view of the main channel, and she still displays a sense of wonder about the vessels sailing past.

“When people visit my office, the first thing they do is look out the window. It’s majestic, it’s beautiful. Plus, it’s extreme engineering. It’s huge ships, huge cranes. It’s exciting.”

Knatz has fond memories of her graduate student years.

“It was just a great, fun experience. One of the things that USC does really well is interdisciplinary research,” Knatz said, crediting her study of both biology and engineering with giving her the competitive edge in her career.

Knatz said she learned leadership skills from her teaching assistant experience at USC, which in April recognized Knatz’s achievements with a USC Alumni Merit award.

“You have to learn how to inspire people,” she said. “USC teaches people to be fearless. To think big. To strive.”

Those are qualities Knatz hopes to pass on to her students at USC, where she taught for more than 30 years, first as a part-time lecturer in the Department of Biology at USC Dornsife, then in environmental engineering at USC Viterbi. After a three-year break, she plans to return this month.

She clearly relishes the experience.

“I love bringing my USC students down here and teaching them about real life. I want to reach engineers when they are young so they understand about the environment and public interaction — that being an engineer involves a lot more than just producing drawings and buildings.”

Asked what she likes most about her job, Knatz smiled.

“The best part is you never know what’s going to happen next. One day it might be a labor issue. Then the next thing you know, we have a battleship,” she said. “You never get bored because things are constantly changing.”

Knatz reflected on the progress she and her team have made at the nation’s busiest port. She thought about her 42 years of dedicated service to the maritime industry.

“Growing up, I never dreamed of getting a job where I can change the world, but now I realize that we are changing the world by transforming an industry.”

Knatz paused, her gaze drawn back to the ships ploughing up and down the main channel outside her window.

“I think I had the passion all along because I grew up by the ocean,” she said. “I love the ocean. I always want to be connected to it.”

Raising the anchor at port of call