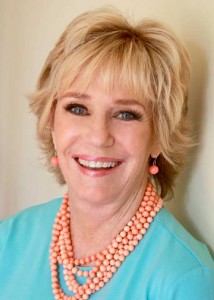 Veteran entertainment reporter Mary Murphy: “I am a great PR spokesperson for USC Annenberg on the red carpet, trust me. I tell everyone that I teach at USC Annenberg, “

Mary Murphy, senior lecturer at the USC Annenberg School for Communication and Journalism, has been news producer for Entertainment Tonight, a contributing editor for Los Angeles Times Magazine and is a frequent contributor to USA Weekend magazine, New York Post, The Hollywood Reporter and the TV Guide Network. Murphy spoke about her experience reporting at this weekend’s 2014 Golden Globes.

So you were at the Golden Globes on Sunday night. What was your role at the awards ceremony?

As a journalist, I was there working, basically, for three different organizations. One, gathering material for my USC Annenberg class. Two, for the New York Post and [the TV program] Extra.

What was the show’s most memorable moment?

There were two things that were the most memorable. One was Jacqueline Bisset’s long walk to the podium, which, interestingly, the journalists mocked, but actors felt a lot of reverence for her. It’s a funny thing, the Golden Globes. I’ve been covering them for so long. The first time I was at the Golden Globes, my dinner partner was John Wayne. That’s how long I’ve been going there. There’s always some mishap. There’s always a moment in the Golden Globes where some actor or actress makes a spectacle of themselves in one way or another. So Jacqueline Bisset was so overcome with emotion that I think that was a moment. The other was Tina Fey and Amy Poehler. Tina Fey and Amy Poehler mocking George Clooney was a great moment. And you know that it was the highest-rated Golden Globes. It jumped 6 percent from last year and 24 percent from the year before, I think. So, it’s the draw of female comedians that was really great to see. I’m not sure if women have ever hosted the Golden Globes, but they are definitely a draw. It’s also a good omen in the era of women.

What about the 2014 Golden Globes was different from past ceremonies?

Better movies, bigger stars, a sense of celebration because the box office for the movies is booming, and you could see it with the stars. You could really feel it in the air.

What knowledge do you bring from these reporting experiences back to share with your USC Annenberg students?

Everything. I bring conversations with the studio chiefs. I bring reporting with the stars. I bring a sense of the beginning of awards season. I always grab people and make them promise to come to USC [Annenberg] to speak to my class. And I am a great PR spokesperson for USC Annenberg on the red carpet, trust me. I tell everyone that I teach at USC Annenberg, and I make everyone promise to come down to USC [Annenberg] to speak. In some ways, I feel like I am the Annenberg ambassador on the red carpet.

For aspiring entertainment reporters, what are the keys to successfully covering events like the Golden Globes and Oscars?

Be tenacious. Don’t obey the rules. Go out of the box. Don’t be so polite. Don’t stand where you’re supposed to stand if you don’t have to. Be innovative. Don’t be intimidated by any movie star. They’re just people, and they’re more scared than the reporter is. And don’t ask stupid questions! You know, really, don’t ask stupid questions. Figure out the one or two questions you might want to ask in advance. Do your research because that’s the key thing. Do research so that when somebody is standing in front of you from the film Nebraska or Her, you have already seen these films and know what to ask.

How can budding entertainment reporters from USC Annenberg make the most of living and reporting in the world’s largest entertainment media market?

They can make the most of it by, one, remembering that they’re journalists and not trying to be a part of the Hollywood community. Two, by blogging or by getting an internship or a lowly job at a television outlet or maybe one of the websites, and volunteering, saying “I’ll do that. I’ll do that. I’ll go to that,” so that they get a lot of practice. The award shows, in an odd way, are like a war zone and people and reporters get trampled on, cameramen are constantly swinging their cameras around and hitting people in the head. It’s tough. It’s physically tough. You want to have a lot of experience under your belt, but I just say keep pestering people, whatever it is. Not necessarily pestering, but don’t give up on asking, “Can I do this? Can I come to this?” At some point, somebody will just say yes. Also, do research and follow the websites, The Hollywood Reporter, Daily Variety, Deadline, Buzzfeed, so that you know what’s going on. Research, research, research! Every seriously professional reporter, it doesn’t matter what field they’re in, knows everything that’s going on all the time.