“These speakers demonstrate the societal impact and professional viability of the arts — a message that will resonate with USC students, who already rely so much on visual communication,” said Erica Muhl, dean of the USC Roski School of Art and Design.

“Roski Talks” unites a number of past series devoted to cross-disciplinary lectures on the arts. It will continue the precedent of including fashion and marketing established by the “Captains of Fashion” series, which hosted speakers such as Citizens of Humanity CEO Jerome Dahan, American Rag founder Mark Werts and Adriano Goldschmied, the person behind Gap and Diesel. 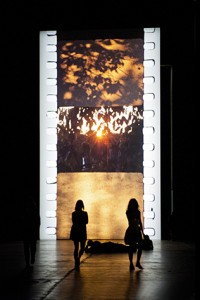 Installation view of FILM (2011) by Tacita Dean at Tate Modern. Dean will appear as a speaker at USC on Jan. 21.

Dean and Struth, both internationally recognized artists, are the first two speakers of the upcoming series. Dean, whose mediums span film, drawing and photography, has exhibited in the Tate Modern in London and at the Sao Paulo and Venice biennials. Struth, a photographer from Germany well known for his series Museum Photographs (1989-2005), has exhibited at the Museum of Contemporary Art (MOCA) in Los Angeles, the Metropolitan Museum of Art and the Museum of Contemporary Art, Chicago. He currently holds an honorary residency at the Villa Aurora in Los Angeles.

Sussman (March 4) is a founding partner of Sussman/Prejza & Co., a firm renowned for its innovative environmental design. Her work includes identity for the 1984 Los Angeles Olympics, interior design for Seattle Opera and celebrated signage for Walt Disney World. Lejeune (Feb. 4) is creative director of the Los Angeles County Metropolitan Transportation Authority, which, since his arrival in 2002, has received 80 awards for its branding and graphic design.

The new series aims to complement the depth of discussion cultivated by the Graduate Lecture Series, a forum for MFA and MA Art & Curatorial Practice candidates to engage with a cross-section of artists, writers and curators contributing to current dialogue. While the Graduate Lecture Series is open to all, these presentations appeal most to an audience invested in challenging and defining the fine arts zeitgeist.

This spring, USC Roski is collaborating with MOCA, which currently hosts its own lecture series, “Art Talks.” The two institutions will host several graduate lectures at the Ahmanson Auditorium in downtown Los Angeles. The venue expansion will offer wider public access to the open and rigorous conversations held between lecturers and graduate students, as well as heighten the civic engagement of both institutions. Featured speakers at MOCA include William Pope.L on Feb. 6, Ron Athey on Feb. 27 and Michael Smith on May 8.

“By maintaining our elevated caliber of speakers, but broadening the conversation to include big names in marketing, design and other creative industries, ‘Roski Talks’ will offer the wider university community an access point into the dialogue,” Muhl said. “The series is reflective of our school’s new name and our commitment to exploring the dynamic intersection of all visual arts.”

The first of the “Roski Talks” features Dean in conversation with art historian Rhea Anastas. It will be held Jan. 21 at 2 p.m. in the Graduate Fine Arts Building.

Admission is free and open to all.

For a listing of all lectures, visit roski.usc.edu/calendar

“This is a great opportunity to come together as family,” says La CASA supervisor Leticia Delgado.

USC Roski series to show development of the arts