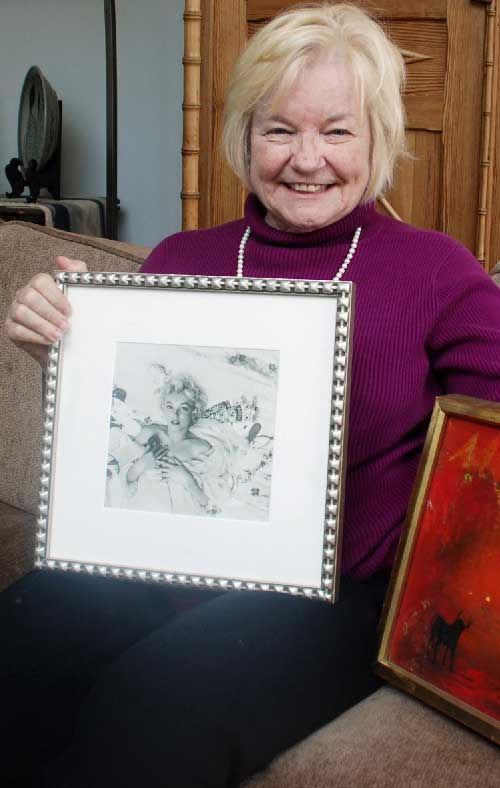 Lois Banner, who wrote a biography of Marilyn Monroe, holds up the legendary star’s favorite photo of herself by Cecil Beaton. (Photo/Susan Andrews)

As a young professor in the 1960s, Lois Banner was moved by history. She had no idea at the time that she would play such a vital part in it.

With ambitions to push forward the nascent field of women’s history, she quickly bumped up against the prejudices of the era. Even in academia, women were criticized for pursuing careers over the role of dutiful wife. At the time, Banner said, no one dreamed she would achieve as much as she has as a feminist and historian — least of all herself.

On Jan. 17, Banner will celebrate a lifetime of scholarship, including 30 years at USC. The professor of history and gender studies at the USC Dornsife College of Letters, Arts and Sciences is retiring from teaching, though she’ll continue to research and write. Her friends and colleagues will gather at the Polymathic Institute in Doheny Memorial Library from 4 to 6 p.m. to discuss the evolution of the field and her contributions to it. The panel discussion will be moderated by USC Gender Studies Chair Alice Echols and attended by prominent leaders in the field.

Banner’s body of work is diverse, including the books Women in Modern America: A Brief History and American Beauty, a social history of feminine beauty in the United States. She’s also authored numerous, richly detailed biographies of influential women such as Marilyn Monroe, anthropologist Margaret Mead and early women’s rights champion Elizabeth Cady Stanton. She has chaired USC Dornsife’s history and gender studies departments, played a critical role in founding its American studies program, and served as mentor to a legion of graduate and undergraduate students over the years.

Echols called Banner a “founding mother of the field of women’s history, and one of its most prolific and talented practitioners.” Her penchant for deep research led her to analyze some 50,000 letters and documents at the Library of Congress for Intertwined Lives, a book about the relationship between anthropologists Mead and Ruth Benedict. When she finished reading it, historian Leila Rupp said it felt as though Banner had tracked down “everything both women had laid their eyes on.”

USC is known for its history and gender programs in large part because of Banner, said Bill Deverell, current chair of USC Dornsife’s Department of History.

“She’s a cultural historian, a gender historian, a women’s historian — that’s a lot to master,” Deverell said. “The work discipline is pretty amazing.”

Banner said she still writes about four or five hours a day. Even when she was teaching and raising two children on her own, she would send them to bed at nine and sometimes work until one or two in the morning, she said.

She attributes that drive to her lower-middle-class background. Like many girls of her generation, she was raised to believe she would marry, but also that she always had to be able to work. Even today, she’s surprised when she thinks back on how far she’s come.

“I’m just a little girl from Los Angeles,” Banner said. “I grew up in Inglewood.”

A major influence was her mother, a music teacher who graduated from USC and almost obtained a PhD from the university. Banner was inspired to earn her doctorate in American history in part to honor her mother.

“I was raised to believe USC was Nirvana,” she said. “The day I was given a job here was the happiest day of my life. I had this kind of celestial vision of what USC was. I felt I was fulfilling my family’s dreams by becoming a professor here.”

Teaching at USC offered her intellectual autonomy, something that she had to struggle for when she was just starting out.

“I’ve really responded, in a strange kind of way, to the entrepreneurial nature of this university,” she said. “Particularly in my earlier years, I found that, if you have a good idea, left or right, you can get support here.”

The academic world hadn’t always been so receptive. While earning her PhD at Columbia University, she was often told to pursue marriage rather than fellowships. There were a few male professors who respected and encouraged her, but more often, Banner found sexist attitudes pervaded academia. That included Rutgers University where she taught, despite its all-female Douglas College being an early incubator for the women’s movement.

Her husband at the time taught at Princeton; at one point, the wife of a senior Princeton professor criticized Banner for not attending a party for faculty wives.

Banner pointed out her husband didn’t attend any of her social events at Rutgers.

“But you’re the wife,” she was told. “You should be supporting your husband.”

She describes herself as being shy, quiet and naïve at that time — hard to imagine, considering her vivacious personality — and pushing through that criticism was hard. Two things changed that personality: one was that she had fallen in love with research, and she knew that was what she wanted to do with her life.

The other was feminism. It hit her hard, she said, and like so many women of that era, woke her up to the culture’s iniquities.

“Feminism swept us up into its grasp and made us feel we were worth something,” Banner said. “It made us realize what had happened to us earlier in life wasn’t individual, it was society-wide.”

One of her biggest contributions was bringing together feminist scholars as a community. She was intrigued by a small gathering of older female historians who met each year in the Berkshire Mountains of Massachusetts. Banner and another young scholar, Mary Hartman, expected a meeting of like-minds. They were disappointed to find themselves feeling excluded; the older group was out of touch with new perspectives that were beginning to bubble up.

They decided to hold their own conference at Douglas College, anticipating 50 people or so; 500 showed up. In time, their Berkshire Conference on Women’s History would evolve into one of the most recognized gatherings for feminist scholarship and still draws about 2,000 attendees from across the globe today.

A banner day for USC historian