For the first time, scientists and engineers have identified a critical cancer-causing component in the virus that causes Kaposi’s sarcoma, the most common cancer among HIV-infected people. The discovery lays the foundation for developing drugs that prevent Kaposi’s sarcoma and other related cancers.

“The mechanism behind the Kaposi’s sarcoma-associated herpesvirus [KSHV] that causes healthy cells to become malignant is not well understood despite two decades of intensive studies,” said S.J. Gao, professor of molecular microbiology and immunology at the Keck School of Medicine of USC and principal investigator of the study. “This is the first time that a viral factor has been shown to be required for KSHV-induced malignant transformation. We have identified a mechanism by which these tiny viral molecules cause the cells to become malignant.”

Distinguished by dark lesions on the skin, Kaposi’s sarcoma most commonly develops in people who are infected with KSHV and also have compromised immune systems. Although many people infected with KSHV never show any symptoms, Kaposi’s sarcoma is a persistent problem in areas where HIV infection is high and access to HIV therapy is limited. More than 90 percent of the population in some areas of Africa shows signs of KSHV infection, according to the American Cancer Society. 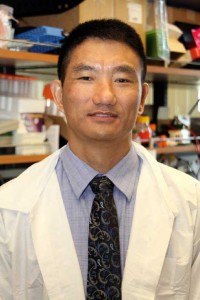 S.J. Gao, professor of molecular microbiology and immunology at the Keck School of Medicine of USC (USC Photo/Jon Nalick)

Gao and colleagues from the University of Texas at San Antonio (UTSA) and the University of Texas Health Science Center at San Antonio studied KSHV using a rat stem cell model they developed in 2012. Until then, researchers had been unable to study the virus because most healthy cells, once infected with KSHV, died before turning into cancer cells.

In this study, which appeared in the Dec. 26 edition of the peer-reviewed journal PLOS Pathogens, the team identified a cluster of viral microRNA molecules that are necessary to transform healthy cells into cancerous ones. When this microRNA cluster was suppressed, the cells died after they were infected with KSHV. Flipping the switch and turning the cluster back “on,” however, allowed the cells to stay alive and become malignant when infected with the virus.

Using advanced genomic methods, the researchers also found that the microRNAs target the IκBα protein and the NF-κB cellular pathway, both of which are associated with cancer development.

“Our results suggest that this cluster of KSHV microRNAs and their regulated NF-κB pathway may be potential targets for new therapeutics of KSHV-related cancers,” said Gao, who is also a member of the USC Norris Comprehensive Cancer Center. “Several of the microRNAs appear to have redundant functions, so targeting their common pathways might be a more feasible approach. It would be interesting to test them in the KSHV-induced Kaposi’s sarcoma model.”

Yufei Huang, professor of electrical and computer engineering at UTSA, is the study’s co-corresponding author. Other USC authors include researchers Ying Zhu, and Tiffany Jones. The work was supported by the National Institutes of Health (grant numbers CA096512, CA124332 and CA177377).