“The students in this auditorium today come from 42 states and 22 different nations. Nearly one out of four of you are the first in your family to attend college,” Nikias told more than 1,000 students and guests gathered in Bovard Auditorium for the ceremony. “If you feel special that you are here today, it’s because you are!”

Nikias acknowledged, “As you begin your journey at USC, it is only natural that you may feel a little uneasy about starting mid-year.”

Then he told the story of community college transfer Faye Espiritu, who also started in the spring and quickly became involved in campus life. Last month Espiritu graduated a semester early and moved to San Francisco to start her career with tech industry giant Oracle.

To mark students’ entry into the Trojan Family, the New Student Convocation was added to USC’s Spring Welcome — five days of opportunities for students to explore Los Angeles, cheer on the Trojans at the USC vs. Arizona State basketball game, take a crash course in library research and attend the Student Involvement Fair, among other events and activities. 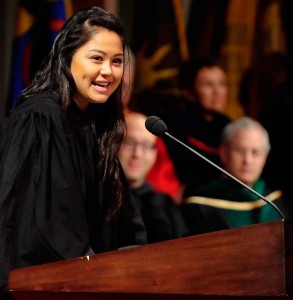 Monica Parra advised new students to “get ready for the fastest, bumpiest, most breath-taking ride of your life.” (USC Photo/Gus Ruelas)

The ceremony included remarks from faculty, university administrators and senior Monica Parra, executive director of USC Program Board, whose speech was punctuated by laughter as she shared USC experiences — getting her first C, which “scarred me for life,” kissing a normal sleep schedule goodbye and studying until your brain aches.

“Visiting office hours after failing a midterm only builds your relationship with a professor who might one day become your life-mentor,” she added.

That advice resonated with Nicholas Chuang, a freshman business major from San Jose, Calif., who chose USC because of his “family legacy.” His father, a USC graduate, is still in contact with his faculty mentor, George Chilingar, professor emeritus at the USC Viterbi School of Engineering.

Extending a greeting from the USC faculty, Professor Jacob Soll of the USC Dornsife College of Letters, Arts and Sciences urged students to “knock on our doors and ask us to be your guides. We’re your self-improvement, risk-management consultants.”

Provost Elizabeth Garrett told the student audience, “I’m sure you’ve already sensed that this is a unique and supportive community” and advised them to “above all, be curious, explore and grow.”

Leah Hansen and Yue Qian, both USC Thornton School of Music performance majors, received a standing ovation for their rendition of Handel’s “Passacaglia in G minor.”

Hansen began studying cello at age 3 and at age 8 became the youngest winner of the LA Cello Society Scholarship Competition. Qian has performed the violin in concert halls from Shanghai to Chicago and has participated in music festivals in Austria, Germany, Canada and the United States.

During the ceremony, deans from USC’s 19 schools officially bestowed upon their students “all the rights, responsibilities and privileges accorded to the University of Southern California community of scholars.”

In his closing remarks, Ainsley Carry, vice provost for Student Affairs, encouraged the students to get involved in social justice.

“Millions suffer needlessly from hunger, poverty, educational inequities and environmental abuse,” Carry said. “You are the generation we have been waiting for. You are surrounded by the best scholars and scientists in the world. Use your time and resources at USC to bring an end to a social challenge that you care about.”