Percival Everett, Distinguished Professor of English at the USC Dornsife College of Letters, Arts and Sciences, has been awarded a 2014 National Endowment for the Arts (NEA) creative writing fellowship. Everett is one of 38 authors, including nine Californians, selected from more than 1,300 applicants. Each winner will receive $25,000 for his or her project. 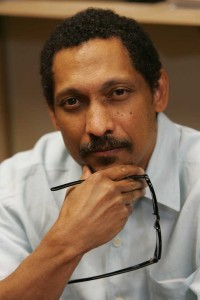 Percival Everett will use his National Endowment for the Arts creative writing grant to fund the research for his next book. (Photo/Philip Channing)

Everett will use the grant for his next fiction project based on true events, which involves a research trip to Algeria and the island of Corsica in the Mediterranean Sea.

He will investigate the story of the French World War II submarine Casabianca, which was part of the French fleet in the port of Toulon. In 1942, the sub escaped from Toulon as German forces tried to seize the French fleet. The vessel and her crew went on to fight with the Allied forces and participate in the liberation of Corsica.

“The story was brought to me by a French film director named Camille de Casabianca,” said Everett, who teaches in the PhD in Creative Writing and Literature program. “So you can see her connection to the story. Her name comes from the village on Corsica for which the submarine is named. She would like to eventually work on a film together, but we’ll see how that goes.”

Everett has published 25 books by Graywolf Press, including Assumption: A Novel (2011); I Am Not Sidney Poitier (2009); The Water Cure (2007); American Desert (2006) and Wounded (2005), for which he received the PEN USA 2006 Literary Award. For his book Erasure (2001), he earned the Academy Award for Literature of the American Academy of Arts and Letters as well as the Hurston/Wright Legacy Award. His most recent publication is Percival Everett by Virgil Russell (2013).

The NEA was established by Congress in 1965 as an independent agency of the federal government. To date, the organization has awarded more than $4 billion to support artistic excellence, creativity and innovation for the benefit of individuals and communities.

Everett, USC professor of English, will discuss his acclaimed novel ‘Erasure’ and other works.