It’s an unusual coupling: A linguist and a marine biologist are working together to investigate the human tongue. In their study, the USC Dornsife College of Letters, Arts and Sciences researchers are using two species of octopus and tiny worms that helped win a Nobel Prize.

The work is funded by a three-year grant from the National Science Foundation, and the investigators will use facilities at the USC Wrigley Marine Science Center on Catalina Island for some of their research.

The research is funded through an NSF program called Integrated NSF Support Promoting Interdisciplinary Research and Education (INSPIRE) that “is intended to encourage investigators to submit bold, exceptional proposals.”

The project at USC Dornsife certainly fits that description.

The project will compare the movement of the tongue to the movements of the arms of the octopus and the body of a very small and thoroughly studied worm known as C. elegans. All three muscular systems work without bones that function as rigid “levers.” Hydrostatic, their function is based on the resistance of fluids to compression. Squeezing water in one part of a muscle exerts pressure on water in other parts of the muscle, forcing it to move.

“The hydrostatic principle is the common denominator for these three systems,” Iskarous said. “For the worm, it’s for locomotion; for the octopus, it’s for manipulation; for the tongue, it’s for communication and speech.”

Iskarous will work with a USC Wrigley Institute faculty member, Andrew Gracey, associate professor of biological sciences and a co-principal investigator on the grant. Gracey will examine the nematode worm C. elegans and the connection between the worm’s proteins and its neurons to determine the connection between its genetics and its behavior. A third researcher on the project — the lead octopus expert — is Jennifer Mather, professor of psychology at the University of Lethbridge in Alberta, Canada.

C. elegans has served as an “experimental workhorse” since the 1970s, and it was used in genetic research that led to the Nobel Prize in physiology or medicine in 2002. (One of the Nobel laureates, Sydney Brenner, honored C. elegans as “Nature’s Gift to Science” in the title of his Nobel lecture.) C. elegans is a nematode, part of a phylum of worms found in nearly every ecosystem, from the tropics to the poles, from the lowest elevation to the highest, and it measures one millimeter end-to-end.

Iskarous described C. elegans as a “simple complex organism,” adding that decades of research have documented the characteristics of every one of its cells.

“We know the number of neurons in C. elegans; we know the connectivity between every neuron and every other neuron, and we know which neuron cells are connected to muscle cells,” Iskarous said. “If you know the neural layout and the neuromuscular layout, you have a chance at formulating simple mathematical ideas that are linked to movements of the organism and can be measured.”

The NSF project will develop algorithms and geometric analyses to create “numerical descriptors” for movements of C. elegans under a variety of conditions, including mutations to its genes. Gracey said gene mutations often have obvious impacts on the worm’s movements and coordination, and the numerical descriptors might be used to quantify the effects of different genes in C. elegans on movement. The same process might be used to describe the role of genetics in the movement of octopus arms and the human tongue.

Iskarous and Gracey will study the worm’s use of dopamine, a chemical released by nerve cells to send signals to other nerve cells. Iskarous wants to look for connections between dopamine signals in C. elegans to linguistic problems in humans, specifically the speech disorders associated with Parkinson’s disease. Parkinson’s is a cellular deficiency in the basal ganglia, a part of the brain that makes dopamine, and scientists are using C. elegans in studies of this degenerative disease.

Iskarous will examine how the degeneration of cells that produce dopamine affect speech, especially through impacts on the flexibility of the tongue. Before arriving at USC Dornsife in 2011, Iskarous pursued this line of research at Haskins Laboratories in New Haven, Conn.

In the search for rules that govern hydrostatic muscular systems, the project will examine one of the most versatile systems of all — the arm of the octopus. Each of its eight limbs can adopt so many configurations and perform so many manipulations that it seems to have “infinite degrees of freedom,” Mather said.

Mather and a postdoctoral researcher will participate in the USC Dornsife project, including work with two species of octopus that live in the waters around Catalina Island.

Mather said each octopus arm has extraordinarily complex sets of muscles, and the animal can use some of them as a “skeleton” for support while other muscles contract.

“An octopus can extend or contract its arm, bend it anywhere along its length and twist as much as it likes,” Mather said. “Theoretically, it can make a knot in its arm and run the knot down its length and off the tip.

Mather is an ethologist — an expert in animal behavior — and she has been studying and writing about the octopus and other cephalopods since 1978. She will help Iskarous and Gracey search for similarities between the octopus’ manipulation of its arms with the movement and function of the human tongue.

Another octopus biologist, Jean Alupay, joined the research team this month. Alupay is finishing a Ph.D. in the Department of Integrative Biology at the University of California, Berkeley, and will work as a USC Dornsife postdoctoral researcher on the University Park Campus and at the Wrigley Marine Science Center.

“We hope to base most of our study of their natural behavior on field observations using scuba diving, snorkeling and video recordings by collaborators,” Alupay said.

“The human tongue is a very different muscular system than the rest of the human body,” Iskarous said. “Our bodies are vertebrate mechanisms that operate by muscle working on bone to move. The tongue is in a different muscular family, much like an invertebrate. It’s entirely muscle — it’s muscle moving muscle.” 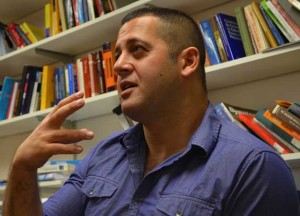 “The degeneration of cells that produce this chemical neurotransmitter, dopamine, have effects on behavior,” Iskarous said. “C. elegans doesn’t have a brain or basal ganglia, but some of its cells use dopamine in a way similar to mammals. With the worms, we can manipulate dopamine in much finer ways than is possible in more complex organisms, and we may have a chance to understand more complex connectivity in an animal like an octopus or a human being.”

This project was among the first awards that NSF announced last year through the INSPIRE program. Gracey said one of the challenges they face with this interdisciplinary work is developing a vocabulary that connects linguistics to the movement of organisms such as the octopus and the worm.

“Linguists have a way of describing speech,” Gracey said. “They have a nomenclature, a system of annotation for describing speech — how the tongue moves, how the palate moves, how the lips move — so when they describe the way different sounds are made, they have a standard vocabulary. There isn’t a similar structured vocabulary for octopus movements. In addition, we’re trying to find a mathematical way to describe the worm’s movement, which we can then directly apply to these other movements by the octopus arm and the human tongue.

“It’s a real challenge to compare multiple systems, and this has been a challenge in biology for a long time,” Gracey said. “You don’t have to do this if you’re going to work on one organism, but if you’re working on more than one organism, you need to be speaking the same language and be using the same types of descriptors.

“We’re still scratching the surface on this,” he added. “It’s a very complicated project.”

Dispatches From the Oceans of Micronesia

What happens when 24 students take to the ocean to study the fragile ecosystems of Micronesia’s coral reefs?

Octopus got your tongue?