When Keck Hospital of USC received a grant to make a film about coaching kids with attention deficit hyperactivity disorder issues, it envisioned a sort of public service announcement or educational documentary.

The result was Well Played, a 20-minute short about a talented soccer-playing boy who can’t seem to focus on the game. The film follows the evolving relationship of the child and the coach in his search for successful strategies to help the boy become an effective player.

The video has been shown at conferences in Beijing and Vienna and has won prizes at three film festivals so far. It includes all the information that would have gone into a PSA, but as Kagan, a respected film and television director, explained, “Facts inform while stories transform.”

Impactful films often inspire people to make changes in their own lives and in the world. The same can be said of impactful nonprofit organizations. When it comes to attracting an audience, however, there’s a significant differential. It’s a lot easier to get people to watch a good film than it is to get them to listen to a presentation about urgent, important societal issues. This is why effective filmmaking is often seen as a game-changer.

CMML acts as an equalizer. Its mandate is to embed the kinds of facts and information that can motivate awareness and behavioral change into engaging cinematic experiences — without being preachy or heavy-handed. The aim is to create transformative work, whether it’s with a feature-length drama, an animated short, a documentary or PSA.

Established in 2009, CMML is run by Kagan, a film industry veteran and strong advocate for Entertainment Education, or E-E, the common term for entertainment media that has a change-making agenda.

Wide-ranging messages around the world

E-E programs are produced around the world, in the form of soap operas and drama series, with messages about domestic violence, family planning, literacy, health and civic duty. Kagan has used the approach in his own work, directing the award-winning Conspiracy: The Trial of the Chicago 8 about effective political action, Bobbie’s Girl for Showtime about lesbian relationships and the Color of Justice for HBO about racial profiling. He also produced and directed Freedom Files, a 10-part series that examined threats to civil liberties. It aired on PBS, Court TV and Link TV.

“Cinema is the most effective form for influencing shifts in how we perceive the world and what we can do to make a difference,” Kagan said. “Film and video motivate action from things as simple as clothing styles to worldwide political undertakings.

“The history of the narrative in affecting society ranges from books like Uncle Tom’s Cabin that energized the abolition movement in the 1850s to today’s identifying with characters in dramas and ads where we then adopt their behaviors,” he explained. “E-E puts the theories of motivating change into the power of narrative storytelling.”

By conducting collaborative research with USC schools and departments, as well as with nonprofit organizations, Kagan and his team determine how cinema can be used as an effective tool specific to their needs. The individuals then become a production team — developing and making films that the departments and organizations can use to share their messages as widely as possible. For example, Well Played has been shown to physicians, international athletic organizations and academic and government groups around the world. 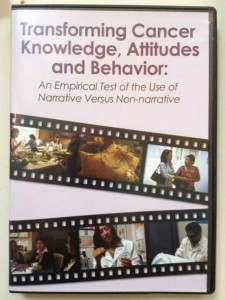 Another award-winning project tested the effectiveness of a drama versus an informational video about cervical cancer.

Another award-winning project, which was conducted with the Keck School of Medicine of USC’s Institute for Prevention Research and the USC Annenberg School for Communication and Journalism, sought to test the effectiveness of an entertaining drama versus a nonnarrative information video in conveying the message that women, regardless of their sexual habits, should have pap tests as a diagnostic tool for cervical cancer.

The dramatic narrative, titled Tamale Lesson, showed a family of Latinas talking about sex and health as they prepare food for a quinceanera.  The nonnarrative informational, titled It’s Time, used interviews with doctors and experts, as well as animation and vox populi commentaries. Both movies were of the same length and contained the same information and can be seen on CMML’s website.

Research measuring the effectiveness of these two films showed that the entertaining drama was as effective as the informational in relating specific facts.  But more significant was that the drama scored higher statistically in motivating action.

“At USC County Hospital, Hispanic women in particular came in with later stages of the disease, and younger women were coming in with the Human Papillomavirus [HPV] already transformed into cancer cells.”

Baezconde-Garbanati said Tamale Lesson has garnered a lot of attention in the medical field, especially because of the response it generated among the study’s participants. 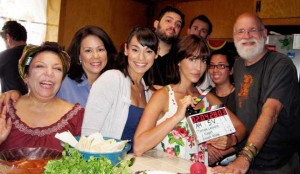 Jeremy Kagan, right, with the cast and crew of Tamale Lesson

“The narrative was much stronger than the informational in changing attitudes about the HPV vaccine that is now being recommended for young girls. And six months after the study, all the women who participated had either made an appointment for a pap test or were planning to. That’s why we came up with a new and creative way of reaching these women,” she said. “This is the kind of disease that’s 100 percent preventable. There’s no reason for women to be dying from this disease.”

Andy Lipkis, founder and president of Tree People, a Los Angeles-based organization that works on sustainability issues said, “The brilliance of the Change Making Media Lab is that it works with us to take very complex concepts, from engineering and science, that would generally take me 30 to 45 minutes to explain, and breaks them down into beautiful, efficient five-minute or less stories that are understandable and entertaining without compromising the integrity of the message.”

CMML created a five-minute Web-friendly video for Tree People to illustrate with amusing animation the organization’s message about how to effectively refit streets and houses to preserve urban water loss.  The video has been shown around the country to mayors and city councils, as well as governmental environment specialists around the world.

Kagan said he would like the entire USC community to use CMML to develop affordable and effective videos.

“CMML was founded to provide the expertise of talented filmmakers who can find the appropriate cinema to advance ideas and inspire action,” he said.

He also sees the lab as a way for Trojans to work together for the benefit of the university, the neighborhood, the city and society.  In addition to enlisting faculty and staff, he frequently calls upon recent USC graduates to work on the projects, allowing them to apply the skills they learned in class to real-world issues and filmmaking.

The diversity of CMML’s projects is evident, and Kagan stressed that they are dedicated to supporting a variety of socially responsible undertakings. The lab has made three videos for The Doe Fund in New York, the most successful organization working with the homeless, and has made five videos for the Community Environmental Legal Defense Fund and the Democracy School, which build sustainable communities by assisting people to assert their right to local self-government and the rights of nature. CMML has also made videos for Bioneers, a Los Angeles-based nonprofit that advances holistic education for global social, cultural and environmental issues by identifying progressive yet nature-honoring solutions to rising challenges of instability, inequality and unsustainable growth.

The lab is currently developing a Web series called Bite Me! in collaboration with the Obesity Research and Mobile Lab at USC to empower preteens to confront issues of obesity, immigration, self-worth and collaboration.

CMML also is in conversation with the Aspen Music School, the famous training ground for classical musicians. The lab is creating a television series focusing on the relationships of its teachers and the talented students who compete for admittance to its programs.  The lab has even tackled peace in the Middle East, using a Visions and Voices grant to bring together Israeli and Palestinian filmmakers to share their work and discuss ways that cinema could help the peace process.

Lipkis said CMML is committed to entertaining filmmaking and devoted to being effective with the messaging. Kagan wouldn’t have it any other way.

“USC and the School of Cinematic Arts have allowed us to encourage responsible filmmaking, recognizing that as creators and professionals we have the opportunity to use our craft to inspire viewers to positive action,” he said. “Now that’s a rewarding life.”