Six years ago, then-16-year-old high school student Sanjay Rajpoot was channel surfing at his parents’ home in Santa Barbara, Calif., when a documentary caught his attention. It was about hydroponics — the practice of growing plants in water without soil.

After watching for a few minutes, he was hooked.

“The program showed rooftop gardens in Singapore where you could farm with 90 percent or more less water, allowing people to get 10 times the yield of surface area land compared to soil,” said Rajpoot, now a senior majoring in physics at the USC Dornsife College of Letters, Arts and Sciences and chemical engineering and nanotechnology at the USC Viterbi School of Engineering.

“It meant you could grow more food with less,” he added. “It just seemed better for everyone, and I wondered why this growing method wasn’t prevalent everywhere.”

That moment of curiosity turned out to be life-changing for Rajpoot, now launching Sustainable MicroFarms, a new company aiming to revolutionize farming worldwide by taking hydroponics mainstream. Rajpoot’s goal: helping to solve the food crisis in underdeveloped nations by making the alternative farming method affordable, easy and accessible.

As a teenager, Rajpoot did not need TV to tell him about hunger. He had already seen it firsthand while accompanying his parents on humanitarian missions to India.

When Rajpoot arrived at USC, he originally studied business and physics with the intention of starting a hedge fund or working in investment banking. But he changed gears.

“I quickly realized that, given my background, the world of high finance probably wasn’t my calling in life and that I would rather do something good.”

Rajpoot’s father is a medical professor from Indore and his mother, originally from New Delhi, teaches medical technology.

“Growing up there was always an unspoken rule that if you are going to do a job, you need to be helping other people,” Rajpoot said. “Every time I’ve gone to India I have seen people struggling to get enough to eat. That gave me very strong motivation.”

Remembering that hydroponics documentary he watched as a teen, he began studying environmental science under Myrna Jacobson Meyers, assistant research professor of biological sciences at USC Dornsife and a hydroponics expert.

“I gradually understood that the reason hydroponics is not more widespread is because it’s difficult to understand and execute. It’s also expensive,” he said. “I set out to start a business that would solve those problems so hydroponics could become more prevalent in the farming industry, thereby providing a greater benefit to people everywhere, particularly in places like India, China and Africa that lack infrastructure.”

So Rajpoot switched majors. He believes he must be the first person ever to graduate with degrees in physics, chemical engineering and nanotechnology. During his studies, he developed the Genesis Controller, a device he described as “an out-of-the-box solution to farming with hydroponics or aeroponics.”

Equipped with sensors to measure electrical conductivity and pH, the machine, which retails at $750, automatically ensures that optimal levels of nutrients are delivered to plants, improving output by 10 to 30 times.

“You no longer need prior knowledge of chemistry or horticultural science to use this farming technique because the controller is intuitive, and it’s preprogrammed to automatically do all the things you have to do while farming,” said Rajpoot, noting that hydroponics can be used to grow almost anything, even trees.

He believes the device will bring hydroponics to the masses, introducing the alternative growing method to backyard farmers in America and providing a more efficient way of growing fruits and vegetables in countries where huge populations suffer from malnutrition. 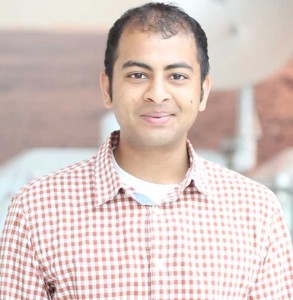 Rajpoot also has his eye on the commercial agriculture industry in the United States.

“We have already raised $160,000 and are currently seeking additional funding to ramp up our engineering and apply our findings to developmental business and technology,” he said. “This is an emerging market and we want to scale up our solution so we can control its expansion into commercial agriculture where it has enormous potential to take over most of the industry and convert it to sustainable hydroponic or aeroponic farming.”

“Although there have been similar products in the past, they were never made to be intuitive, easy to use or affordable.”

Rajpoot was drawn to study at USC because of its excellent reputation.

“At first I was looking into the advanced technology schools but understood that knowing business is essential to success,” Rajpoot said. “Knowing that the West Coast is the best coast to start a technology company, it was hardly difficult to choose schools,” he noted. “USC is the best choice I could have made. At USC Dornsife, I received mentoring and was given access to resources in both business and science that would be difficult to find elsewhere.”

Rajpoot said USC Dornsife has allowed him to assemble a team ranging from professors to professionals that would have been impossible anywhere else.

“We have a pretty diverse group of people who all complement each other,” he said. We have specialties from nanotechnology to a family tree of tech entrepreneurship, engineering or banking and finance.

“Making connections and the social aspect was also very important to me, and I thought USC was a place where I would thrive academically and also be able to make many lifelong friends,” he said.

In addition to Meyers and Moh El-Naggar, assistant professor of physics at USC Dornsife, Rajpoot paid tribute to his mentors at USC Viterbi, especially optics pioneer and assistant professor of chemical engineering Andrea Armani, who was recently named one of Popular Science magazine’s “Brilliant 10” young scientists in the nation.

“I was basically given free reign to the labs I needed because my professors trusted me to go in there and get my work done,” he said. “I was like a kid in a candy store — I got access to thousands of dollars of research journals and to laboratories where I could go and test out my hypotheses or build anything I could imagine, and then I was able to get research credits for that.”

Rajpoot admitted that juggling his studies with launching his business was challenging.

“It was a struggle,” he said. “There were times when I was off the grid for weeks at a time, from 5:30 a.m. until 10 p.m. At times I was told, ‘You did more work than a graduate student could do in one semester.’ I was just doing what I wanted to do.

“Sustainable MicroFarms’ mission is to provide people with sustainable access to healthy, high-quality produce and to make farming more affordable, especially in emerging markets where there is the greatest need.”

The Case for Fish and Oyster Farming

Super corn and soybeans are so 20th century. With the world’s population nearing 7 billion on its way to 9 billion by 2050, marine scientists are looking for reliable new food sources through a Blue Revolution — the intelligent use of aquaculture to supplement depleted wild fish stocks with farm-raised oysters and other valuable ocean “crops.”

The groups aim to help incoming students build a sense of community within themselves as well as with faculty.

Political conventions take an unconventional turn, thanks to COVID-19

What will the Democratic and Republican national conventions look like during a pandemic? USC experts predict how each party — and the voters — will proceed.

Fall 2020 update: A message to the Trojan Family from President Carol L. Folt

The USC president shares words of welcome along with academic and activity highlights, health care updates, student and community aid information, initiatives on diversity and inclusion, and much more.