The lab of USC scientist Krzysztof Kobielak has published a trio of papers in the journals Stem Cells and The Proceedings of the National Academy of Sciences (PNAS) that describe some of the factors that determine when hair grows, when it stops growing and when it falls out.

Authored by Kobielak, postdoctoral fellow Eve Kandyba and their colleagues, the three publications focus on stem cells located in hair follicles (hfSCs), which can regenerate hair follicles as well as skin. These hfSCs are governed by the signaling pathways BMP and Wnt — which are groups of molecules that work together to control cell functions, including the cycles of hair growth.

The most recent paper, published in Stem Cells in November, focuses on how the gene Wnt7b activates hair growth. Without Wnt7b, hair is much shorter.

Both papers earned the recommendation of the Faculty of 1000, which rates top articles by leading experts in biology and medicine. 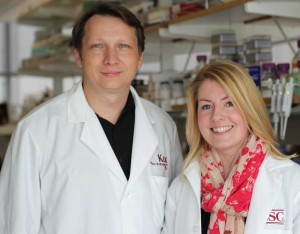 A third paper published in Stem Cells in September further clarified the workings of the BMP signaling pathway by examining the function of two key proteins called Smad1 and Smad5. These proteins transmit the signals necessary for regulating hair stem cells during new growth.

“Collectively, these new discoveries advance basic science and, more importantly, might translate into novel therapeutics for various human diseases,” Kobielak said. “Since BMP signaling has a key regulatory role in maintaining the stability of different types of adult stem cell populations, the implication for future therapies might be potentially much broader than baldness — and could include skin regeneration for burn patients and skin cancer.”

Funding for the studies came from the Donald E. and Delia B. Baxter Foundation Award and National Institute of Arthritis and Musculoskeletal and Skin Diseases of the National Institutes of Health (grants R01-AR061552 and R03-AR061028). Kandyba, the first author for all three papers, was a fellow of the California Institute for Regenerative Medicine in stem cell biology.

A retreat from everything but stem cells

It wasn’t the pristine 27-hole course that drew more than 120 stem cell researchers from USC and beyond to the Desert Princess Golf Resort near Palm Springs.

One’s hair – or lack of it – is the result of a lifelong tug-of-war between activators that wake up and inhibitors that calm stem cells in every hair follicle on the body, according to Cheng-Ming Chuong, professor of pathology at the Keck School of Medicine of USC.