Patsy Dewey ’58 loves libraries — not surprising given her last name.

Though no relation to Melvil Dewey, inventor of the Dewey decimal system, she’s closely connected to the USC Libraries, particularly Doheny Memorial Library. You might say she owns a small piece of it.

“Our Doheny Library is such a jewel,” she said. “Such a jewel!”

Four long, narrow American walnut drawers solidify Dewey’s link to USC. The university officially retired its card catalog in the mid-1990s, but the vintage cabinetry remains. Tucked in an alcove near Doheny’s circulation desk, the card catalog room is a reminder of the USC Libraries’ proud history and contributions to academic life.

Trojans can embrace that history through the Top Drawer Society.

Started in 2003, this special group honors Friends of the USC Libraries who’ve given $10,000 or more. Membership comes with a quirky perk: your own drawer in the catalog room.

Dewey was one of the first members. 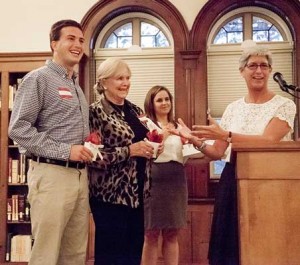 Brass plaques identify her four drawers: one for herself and one each for recent USC Marshall School of Business graduate Cameron Ladd Dewey ’12;  senior Paige Dewey, majoring in communication; and sophomore Steven Robert Dewey III, who is majoring in history. Each drawer is locked, and each grandchild has a unique key. The drawers will be theirs in perpetuity.

Today, Patsy Dewey is CEO of Dewey Pest Control, the Pasadena-based family business. As a self-described “enthusiastic patron of all 24 campus libraries,” she serves on the Friends of the USC Libraries Board of Councilors and the planning committee for the USC Libraries Scripter Award. Whenever meetings bring Dewey to Doheny, she stashes a little something in the grandchildren’s drawers.

“I’ll leave a See’s candy or a little box of cookies,” she said, “or a note of encouragement — ‘Study hard’ or ‘Keep up the good work’ — to let them know I’m thinking about them. Once in a while, I put a little mad money for coffee or snacks. It’s a way for me to communicate during their busy schedules.”

Dewey sees the Top Drawer Society as a way to pass on her love of libraries and of USC to her grandchildren.

“I’ve kind of brainwashed them since they were little by taking them to campus events,” she said. “And it’s worked. They feel a connection there. Their name is on the plaque, that’s nice for them to see. They own a part of the library.”

About 200 drawers are already spoken for, but hundreds more sit vacant. To learn more about joining the Top Drawer Society, contact Amber Dubeshter at (213) 821-1642 or dubeshte@usc.edu.

A Message About the Doheny Library Retrofit

As a student, Aaron “A.J.” Eckstein revitalized the Latino Business Student Association. Now the recent graduate is connecting people with their dream jobs through his Final Round interview podcast.

What secret treasures lie hidden at the USC Libraries?