New research from USC suggests that cells in the blood-brain barrier may control multiple steps in the progression of Alzheimer’s disease. These cells, called pericytes, could serve as potential targets for novel Alzheimer’s treatments.

“To my knowledge this is the first study showing how the brain’s vascular system may contribute to the development of Alzheimer’s disease,” said study leader Berislav Zlokovic, director of the Zilkha Neurogenetic Institute at the Keck School of Medicine of USC and holder of the Mary Hayley and Selim Zilkha Chair for Alzheimer’s Disease Research at USC.

Alzheimer’s is a degenerative brain disorder that leads to memory loss and changes in thinking and other brain functions. Today, more than 5 million Americans suffer from Alzheimer’s disease, the sixth leading cause of death in the United States. While there currently is no cure, scientists are actively studying the pathology of the disease.

In this study, which appears online in the Dec. 13 edition of Nature Communications, Zlokovic and his team show that pericytes may determine the presence of several hallmarks of Alzheimer’s disease.

Brains from Alzheimer’s patients typically have an abnormal accumulation of beta-amyloid protein next to brain cells called plaques, clumps of tau protein inside neurons called neurofibrillary tangles and extensive neuron loss. They often have problems with brain blood vessels reminiscent of vascular dementia, including wounds and a buildup of beta-amyloid protein in vessel walls.

“This study may provide a better understanding of the overlap between Alzheimer’s disease and vascular dementia,” said Roderick Corriveau, a program director at the National Institute of Neurological Diseases and Stroke, which co-funded the study.

Some researchers believe that increases in beta-amyloid are a primary cause of Alzheimer’s, which is supported by genetic studies that link the disease to mutations in amyloid precursor protein (APP), the larger protein from which plaque-forming beta-amyloid molecules are derived. Previous studies on transgenic mice, however, show that increased beta-amyloid levels only partially reproduce the problems associated with Alzheimer’s. The animals have memory problems, beta-amyloid plaques in the brain and vascular damage, but none of the neurofibrillary tangles and neuron loss that are hallmarks of the disease.

Found primarily in the blood-brain barrier, pericytes are cells that protect the nervous system from harmful molecules in the blood. To study how pericytes influence Alzheimer’s disease, Zlokovic and colleagues crossbred mice genetically engineered to have a form of APP linked to familial Alzheimer’s with ones that have reduced levels of platelet-derived growth factor beta receptor (PDGFRβ), a protein known to control pericyte growth and survival. Previous studies have shown that PDGFRβ mutant mice have fewer pericytes than normal.

Both the APP and PDGFRβ mutant mice had problems with learning and memory. Crossbreeding the mice enhanced these problems. It also induced Alzheimer-like changes in the brain and blood-brain barrier of the mice. The mice had increased beta-amyloid plaque deposition near brain cells and along brain blood vessels.  Surprisingly, the brains of these mice had enhanced neuronal cell death and extensive neurofibrillary tangles in the hippocampus and cerebral cortex, regions that are typically affected in Alzheimer’s patients.

“Our results suggest that damage to the vascular system may be a critical step in the development of full-blown Alzheimer’s disease pathology,” Zlokovic said. 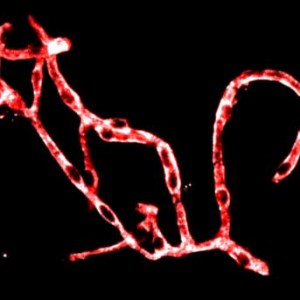 The researchers also addressed the role of the vascular system in these mice. The crossbred mice had more pericyte death than the PDGFRβ mutant mice and leakage of molecules, such as immunoglobulins, from the blood into the brain. Other experiments suggested that pericytes may transport beta-amyloid across the blood-brain barrier and showed that crossbreeding the mice slowed the rate at which beta-amyloid was cleared from the brain.

Zlokovic and his colleagues concluded that their results support a “two-hit” vascular hypothesis of Alzheimer’s disease, suggesting that increased beta-amyloid deposition and a breakdown of the blood-brain barrier combine to cause Alzheimer’s. If true, then the results suggest that pericytes and other blood-brain barrier cells may be new therapeutic targets for the disease.

“I think, for future studies, the Alzheimer’s research community should try to focus more attention on understanding the role of the vascular system in disease,” Zlokovic said.