With instruments like “trash harp,” “birdhouse sitar” and “woolly wine bottle trombones,” the sound art concert on Dec. 16 promises to delight and surprise. The performance is the final project of “Sound Art,” a collaborative course between the USC Roski School of Art and Design and the USC Thornton School of Music. The concert will offer the premiere of USC Thornton student compositions as played on sound objects and instruments designed and made by USC Roski students.

Karen Koblitz, associate professor of the practice of fine arts, and Veronika Krausas, associate professor of the practice of composition, held the inaugural Sound Art class in 2010. They viewed it as the perfect cross-disciplinary subject — bringing together the compositional, aesthetic and structural expertise of the two schools’ students, marrying innovation and avant-garde applications while challenging students to work through the strategies inherent in collaborative endeavors.

“As an individual, you can start down a path to build something, but when you bring someone else in, it grows in a much more fruitful way,” Krausas said. In “having the combination of visual and aural, there’s a mutual problem-solving situation that arises, and that seems to fuel the creativity.” 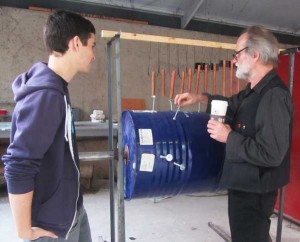 To ensure exposure to a broad range of instruments, the course featured a roster of guest lecturers and performers, including flute maker Susan Rawcliffe, John Schneider, who played instruments designed by musical innovator and microtonal composer Harry Partch, and Trimpin, a prominent sound artist and recipient of the MacArthur Genius Award. Trimpin, who specializes in electronic sound art and Musical Instrument Digital Interface (MIDI), visited several times and ultimately inspired the class’ creation of extruded clay tubes. Students will play the tubes for the “Trimpin Tube Suite” during the final concert.

“Trimpin has an incredible way of turning ordinary objects into music,” said Brendan Dugan, a junior majoring in fine art. “He brought in the release mechanisms used in soda fountains, then hooked them to pressurized air on one end and a duck call whistle on the other. Every time he pressed a key on his midi keyboard, the duck call would sound. It was such a unique approach, and it was a privilege to see him work.”

Throughout the course, students researched various other sound artists in order to impart historical context and current developments for the genre. While in some ways sound art remains on the fringe, popular musicians like Björk, Radiohead and Nine Inch Nails are increasingly incorporating elements of sound art into their work.

“People are making instruments out of vegetables, snow shovels, tennis rackets — it’s amazing what they do,” Koblitz said. “There are parameters being broken, challenged and extended with sound art.”

Although sound art is not entirely new — composer John Cage famously used indeterminate sounds in many of his mid-20th century performance pieces — it has recently garnered more attention. Last year, LA><ART hosted Bass Elegy/Devil’s Night, in which artists Scott Benzel and Mark Hagen pumped a recorded score with accompanying vibrations through a wrecked car with a bass cabinet, generating sound density. Sara Rara ’11 comprises half of Lucky Dragons, whose Make a Baby project utilized wires that sounded when activated by human touch.

In the first few weeks of the Sound Art course, Dugan found his inspiration through videos of Trinidadian steel drum performers. He began creating his “barrelophone” by procuring a 55-gallon oil drum on Craigslist, and after some tinkering, magnetically attached screws and bolts to the side of the barrel. Dugan then welded a frame for the barrel to rest on, added a crank to turn it and hung copper tubes from the top of the frame, which the magnetic attachments then struck as the barrel turned. Finally, he topped it off with a toy xylophone.

“The toy xylophone is tuned on a regular scale, but the copper pipes are kind of atonal,” Dugan said. “I learned about different types of tuning in the process and was inspired to go outside of my comfort zone.”

The concert will feature more than a dozen student-made instruments as well as solo compositions, ensemble works, singing and spoken word. Koblitz and Krausas agree the concert’s aesthetic and aural experiences will be stimulating for novice and expert audiences.

“It’s good to get students out of the box — especially at USC, which has an amazing music school and art school,” Krausas said. “What everyone does in class is so different — I find it inspiring.”

The Sound Art concert will be held Dec. 16 at 7 p.m. in Ramo Recital Hall (BMH 100). Admission is free and a reception will follow.

A mix of words and music

“The Shore, Symphony No. 3,” a chorus and orchestra piece premiered on June 1 at the Segerstrom Center for the Arts in Costa Mesa, Calif.

A Simple Gift of Music