Demo Day, the biannual event co-hosted by the USC School of Cinematic Arts’ Interactive Media & Games Division (IMGD) and the USC Viterbi School of Engineering’s Department of Computer Science, was held on Dec. 11. The event featured demonstrations of student games and gave Trojans the opportunity to interview with top executives from the industry.

“Demo Day has become our own version of E3, where we show off the best of our new games, which include an exciting range of platforms and concepts,” said Tracy Fullerton, holder of the Electronic Arts Endowed Chair in Interactive Entertainment. “We have mobile games, VR games, PC games, as well as serious games, comedic games, indie games and hardcore games. It’s a really great group of projects.”

Representatives from Activision, Disney, Electronic Arts, Sony and other companies were on hand for the demonstrations. The projects ranged from first-person virtual reality and multiplayer fantasies to even therapeutic games, all touching on a variety of interactive, immersive experiences.

The projects are part of the “Advanced Games” class taught jointly at SCA and USC Viterbi.

Miralab – A 3-D PC-based game in which players explore an assortment of ecosystems as a jellyfish. The aim is to help this underwater world thrive as you cycle through the shifting perspective of three life stages.

The player assumes control of an adventurer given the ability to fly by an “aether.” When in an area populated by an aether, the player can explore the remains of a civilization in which the landscape slowly deteriorates. Provided with no explanation as to why the area has become deserted, the player must investigate the artifacts of the missing inhabitants to uncover the story behind their absence.

Cole – A 2-D comedic action game that takes place on the S.S. Spaceship. The player is an alien slave whose job is to shovel coal into a furnace that powers the ship. At first, all the game ever tells you to do is shovel coal, but you can disobey the instructions, escape the coal room and begin exploring other areas of the ship, which is where the real adventure begins. 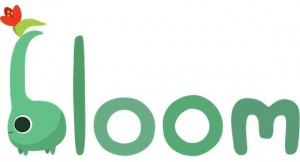 A seedling wields the powers of nature in Bloom.

Bloom – A 2.5-D adventure in which you play as a seedling named Sprout who wields the powers of nature in order to reclaim Earth from the dangerous machines that have taken it over.

Maestros – An online multiplayer game set in a fantasy world where you control a commander and a squadron of cuddly albeit mildly vicious minions. Play as either the diesel-punk knights from the Kingdom of Teutonia or as the alchemists from Genoma with their twisted chimeras.

Fat Loot – A third-person PVP action game in which four players plot against each other after pulling off a daring heist. You control the master thief who enters an ancient Chinese palace to achieve the ultimate theft. Bump, trap and make noise to ruin your compatriots’ plans and be the big winner in a race for a fabulous treasure.

Social Clues – A point-and-click, puzzle-adventure game that teaches communication and social skills to children with autism and developmental disabilities. Players control Pete and Kate Mum as they traverse a stylized world to solve a humorous “who-done-it?” and search for lost toys. Behind-the-scenes actions by players are tracked via key metrics, providing parents and therapists with insight into player progression and behavioral change.

In the gaming world, mega-franchises dominated by high-powered weaponry and high-speed chases have long dominated the marketplace.

Students and staff members representing the Interactive Media Division (IMD) at the USC School of Cinematic Arts were recognized for pushing the paradigm of video games at the eighth annual Games for Change Festival.