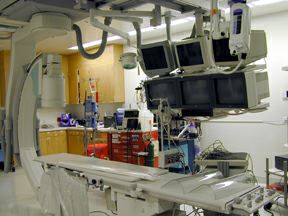 Visitors filled the halls of the unit and flooded into the laboratory rooms, where nurses and technicians explained the technology behind the new equipment.

Another improvement is the images’ high resolution, which offers greatly enhanced pictures. Previous to this technology, x-rays were recorded and stored on film.

“The quality of the labs are in direct proportion to our commitment to excellence,” said Joel W. Heger, professor of clinical medicine and director of the cardiac catheterization laboratories. “That’s really the message that we want to try to be about, what we want to do, and what we want to give the patient community.”

The majority of patients seen at the laboratories, he said, have coronary heart disease or valvular heart disease, with the remaining patient base affected by other coronary conditions such as cardiac muscle disease or congenital heart disease.

When a blockage is detected, the labs’ capabilities include performing a coronary angioplasty, where a pen-sized balloon is inserted through an artery in the groin and snaked through the aorta to the area of blockage.

When the enclosure is reached, the balloon is inflated to smash the plaque, against the sides of the artery walls.

This usually clears the passage and restores adequate blood flow.

Variations of this procedure are done when treating hard calcium-rich plaque, which is more difficult to clear. Options include using a cutting balloon, which functions the same as an angioplasty, except the balloon has razors on its edges to slice the plaque before it is pushed to the sides of the artery walls, radiation, which also helps to prevent the arteries from closing again, and the use of rotoblators, small blades that chop the plaque into microscopic pieces.

In addition to procedures such as these, the labs also perform right heart catheterizations, which assess the pulmonary function of the heart, valvuloplasty, which opens up tight valves, and screenings such as EKGs and stress tests.

To Heger, it is not so much the procedures themselves that are impressive, but their significance to the patients.

For the patient, Heger said, lab procedures mean “getting them pain free, getting their risk factors decreased, and getting them a new lease.” He said: “The labs don’t commit to excellence but the people inside them do. That’s what will help the lab stay on the cutting edge.”

The labs have been under construction for the past three years and are a result of the growth of USC University Hospital and increased demand for specialized techniques and larger procedures.

“I think the real highlight,” Heger said, “is the fact that we are extremely focused on high quality care with a concern and compassion for the patient.” Cynthia Stolicky, charge nurse of the catheterization laboratories agreed: “What makes us special is the people who work here.”