A new 4-minute video from USC lets you watch and listen to dedicated Trojan animators, musicians and dramatic artists during these late-night sessions. 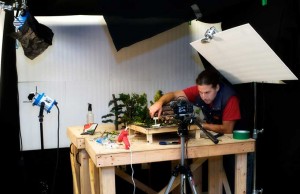 The video also documents late-night work in the cubicles of third-year MFA animation students at the USC School of Cinematic Arts, including a look at a stop-motion lab where Tristan Dyer has spent many hours filming an unusual nonfiction documentary about his great-grandfather’s experiences in World War I.

The Master of Fine Arts Lecture Series, a weekly presentation by internationally recognized artists, curators and writers, is under way at the USC Roski School of Fine Arts.