Ever taken an online poll or left an anonymous comment on a news story? Those actions have a bigger impact than you might realize.

On Nov. 18, the USC Annenberg School for Communication and Journalism welcomed Talia Stroud to talk about the Engaging News Project, which is run out of the University of Texas at Austin and conducts studies on comment sections for online news, the effectiveness of online polls and quizzes, and the word choice for the “Like” button.

In 2011, Stroud, director of the project and assistant professor at the University of Texas, wrote a book called Niched News: The Politics of News Choice, which analyzed how people tend to read news content that aligns with their political preferences and was the foundation for the project.

With the mass transition to online news consumption, certain online media outlets are allowing people to filter their news so that they only see content that matches their own views.

“[It is] reinforcing their partisanship and creating divides among the public, which is something, I would argue, that we want to avoid,” said Stroud to a room filled with students and faculty.

The purpose of the project is to combat bias and polarization in news consumption while aiming “to provide research-based techniques for engaging online audiences in commercially viable and democratically beneficial ways.”

Visiting Professor Mark Lloyd, holder of the Wallis Annenberg Chair, introduced Stroud following a brief description of his attraction to the project.

“[Stroud’s work] is trying to figure out how technology and journalism fit into current realities and the current practice of journalism, with an eye toward both, how to actually make money using some of these tools, but also how one might improve our democracy,” he said. 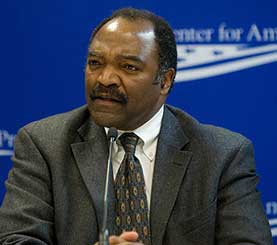 Lloyd also serves as director of the New America Foundation’s Media Policy Initiative; the foundation is a partner of the Engaging News Project.

Stroud’s presentation consisted of four studies conducted by the project about different aspects of online news consumption and commentary. The first of these was online polls and quizzes.

There is a lot of missing information when it comes to online polls, such as how many people took it. A study conducted by the project also suggested that people react negatively to polls with only a few answer options, and when poll results are revealed, people tend to second-guess their own beliefs.

A test performed by the Engaging News Project revealed that slider polls, allowing for more varied answers, resulted in a more positive reaction and more time spent on the website where the poll was found.

The language of additional wording and hyperlinked prompts on news sites was also proven by the project to have affected the way people consume news.

People consumed less entertainment content when the following phrase was added to a webpage: “Thanks for keeping up with the news. Be proud of protecting your democracy.”

“One sentence matters,” argued Stroud, before moving on to a more controversial aspect of online news: the comment section.

The comments on a news story range from insightful to uncivil. Stroud and the Engaging News Project explored whether the presence of the journalist behind a certain news story would change the tone of its comment section.

The project garnered varying feedback from journalists about the idea. Some said that journalists would be out of line by involving themselves in the comment section; others thought that their presence would dramatically shift the tone in a positive way.

Stroud pointed out that the tone may change when the journalist is engaged in the comments “because people know someone is listening.”

Stroud and the Engaging News Project noticed that the word “like” signifies agreement. In some cases, people “like” a comment left by another reader, but that doesn’t mean they agree with it.

Instead of the word “like,” the project tested out button words such as “respect” and “recommend.” In doing so, they found that more people “respected” comments, regardless of their personal beliefs, as opposed to the words associated with the button.

“Even small changes can have important effects,” said Stroud of the project’s efforts to modify the way news is presented.

Seven distinguished arts journalists have been selected as fellows for the USC Annenberg/Getty Arts Journalism Program.

Award-winning sportswriter and journalism professor Alan Abrahamson is considered one of the world’s foremost authorities on the Olympic movement.