In the 1980s, Democratic Speaker of the House Tip O’Neill told Republican President Ronald Reagan that members of opposing parties are always friends after six o’clock.

Political commentator Chris Matthews discussed this and other insights from his new book, Tip and the Gipper: When Politics Worked, in a lively conversation with former California Gov. Arnold Schwarzenegger on Nov. 15 at Doheny Memorial Library. The full event can be watched on the USC Price School of Public Policy YouTube channel.

USC University Professor and California historian Kevin Starr moderated the event hosted by the USC Schwarzenegger Institute for State and Global Policy, which is housed at USC Price.

Bonnie Reiss, global director of the Schwarzenegger Institute, opened the program explaining how “getting government to put people over politics is a core mission of institute, which recognizes that our leaders will not be able to address any of the big policy challenges until they work together.”

Schwarzenegger, the Governor Downey Professor of State and Global Policy at USC, underscored the timeliness of Matthews’ book, given the current state of Washington, D.C., “where the city is frozen, and nothing gets done.”

In contrast, O’Neill and Reagan frequently reached across the aisle to cut deals, though their relationship was far from simple.

Matthews, who hosts the MSNBC series Hardball, previously worked for six years as chief of staff to O’Neill and observed his relationship with Reagan firsthand. Matthews described O’Neill as a “tough, tough customer.”

“The key thing is, it’s not some bromance story here,” Matthews said. “This is about two guys that are professionals in their seventies. They knew it was time for action and for deals. 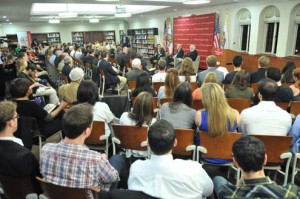 Matthews held up the end of the Cold War as a shining example of how bipartisanship can advance the good of the country — and the world. In April 1985, Reagan sent O’Neill and a bipartisan delegation to meet Soviet leader Mikhail Gorbachev in Moscow.

“You can’t imagine Obama sending Boehner over to meet Putin,” Matthews said. “Then it was treated as a normal, unexceptional reality. And Tip said, ‘I’m the opposition.’ And Gorby said, ‘Well, what’s that?’ And Tip said, ‘Well, it means we don’t disagree on everything. But Reagan’s our only president. We’re with him on this.’ ”

As governor of California, Schwarzenegger also took a bipartisan approach to politics.

Schwarzenegger described how he chose members of his administration, including Democratic Chief of Staff Susan Kennedy, based on talent rather than party affiliation. When he chose Kennedy, the Republican Party leaders called him for a meeting and told him to reconsider. He refused.

“I was not voted in to be the governor of the Republicans,” he said. “I was the governor of all the people, of all 38 million people. We went to do environmental issues, as you know, then health care issues, education issues. It didn’t matter if someone said, ‘This is a Democratic issue or this is a Republican issue.’ We just did those because it was good for the people.”

As governor, Schwarzenegger also pushed political reform, which was unpopular with both parties.

“When you do weightlifting, when you come from that background, you try to lift 500 pounds as many times until you do it,” he explained. “So this is the world I come from. I never give up.”

He fought to establish open primaries and to end gerrymandering, the practice of drawing voting districts to protect incumbents.

These reforms are an important legacy, according to Starr, who served for a decade as California State Librarian until Schwarzenegger named him State Librarian Emeritus in 2004.

“The idea of trying to open up the politics of California so that centrists — bipartisan, centrist Democrats, centrist Republicans, etc. — can start filling up the corridors of power, both in Washington and in Sacramento, is a very important long-term reform of yours,” Starr said. “And you should take great pride in that.”

During the Q-and-A session, USC students and others asked about everything from sequestration to the likelihood of the formation of a third, more centrist political party in the United States. The students also took the opportunity to thank the distinguished trio for sharing their many experiences.

“I just want to thank the three of you guys for being here,” one student remarked. “I was at the Schwarzenegger Institute’s event with Sen. McCain, too, and as students, we’re really thankful to have resources and speakers such as yourselves that we can see.”

Barriers to voting have huge impact on turnout, but Americans overlook their effect

Practical difficulties such as child care requirements and limited polling place hours can curb voter turnout, but USC researchers find most Americans think voting is a matter of belief.