USC and Pacific Asia Museum of Pasadena, Calif., one of the few U.S. museums dedicated to the arts and culture of Asia and the Pacific Islands, announced an affiliation on Nov. 18. The alliance between the museum and the university presents a wealth of collaborative opportunities for both institutions.

The new partnership will preserve the museum’s 1924 Chinese Qing Dynasty-inspired mansion in downtown Pasadena as an art museum and will enhance the scholarship of the faculty and students at USC’s six arts schools and those in the departments of art history, East Asian language and cultures, religion and archaeology. In addition, the alliance will provide a foundation for renewed museum studies and a curatorial training program at USC.

The new name of the museum will be the USC Pacific Asia Museum.

“With its rich history and inspiring works of art, Pacific Asia Museum will be the perfect complement to many academic endeavors at USC. Both of our organizations work to enrich the educational experience, advance art history and preserve the past for future generations,” said USC President C. L. Max Nikias.

“USC is very proud to form a powerful partnership with a local organization that has international appeal and an enduring devotion to promoting the arts.”

Elizabeth Short, trustee and chair of the museum’s strategic planning committee, said: “Since its founding, Pacific Asia Museum has advanced intercultural understanding between East and West through the arts of Asia and the Pacific Islands. Devoted staff, board members and volunteers carry out this mission through exhibitions, tours, cultural and educational events and programs for the community.

“All of us are excited about the affiliation with USC and look forward to this rewarding relationship, which will provide synergies in the study of Asian arts and cultures and support the museum in Pasadena,” she added.

Katherine Murray-Morse, chair of the museum’s board of trustees, said: “We are thrilled that the partnership with USC will enable the museum to enhance its mission and expand its reach as a cultural institution. Pacific Asia Museum, in concert with USC, a renowned Pacific Rim university, will be able to create even greater synergies with this new affiliation in Los Angeles, a global city of the 21st century.”

Elizabeth Garrett, USC provost and senior vice president for academic affairs, said that the new affiliation “will support the scholarship of our current faculty and graduate students, enhance our ability to recruit future faculty and students, and complement our very strong postdoctoral scholars program in the humanities.

“This partnership also highlights USC’s deep connections to the Pacific Rim,” she continued. “What better way to exhibit those ties than through the breadth and beauty of the museum’s distinctive art collection.”

Pacific Asia Museum, founded in 1971 and accredited by the American Alliance of Museums in 2009, has a collection of more than 17,000 items from across Asia and the Pacific Islands, spanning more than 5,000 years. Prominent holdings include the Harari Collection of Japanese paintings and drawings from the Edo (1600-1868) and Meiji (1868-1912) periods, one of the largest collections of Japanese folk paintings outside Japan, a South Pacific bark cloth collection, collections of Chinese ceramics and textiles, and Buddhist art from throughout Asia. 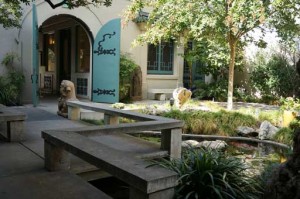 Built in the 1920s by art dealer Grace Nicholson, the museum is a California State Historic Landmark listed on the National Register of Historic Places.

Museum officials approached USC officials in July about considering a partnership. Under terms of the alliance, USC will take over management of the museum.

USC has an unparalleled collection of arts schools at a research university, with more than 6,000 students pursuing degrees in the arts. All six arts schools include a significant number of students from Asia, and creative work by many faculty members in the schools is influenced by Asia. The university as a whole has a number of institutes that focus on the historic, cultural and social dynamics of the Pacific Rim and the Asian-American experience, including the East Asian Studies Center, the Korean Studies Institute, the USC Center for Japanese Religions and Culture, and the USC U.S.-China Institute.

USC recently has developed new graduate programs in arts management, which will be natural partners with the museum, as well as an interdisciplinary museum studies and curatorial training program that is being redesigned.

The USC Pacific Asia Museum will complement the USC Fisher Museum of Art’s permanent collection of some 1,800 objects, many of which are from the Americas and Europe.

“The collection of USC Pacific Asia Museum will be the starting point for a multitude of inquiries related to the culture, history and even future of the Pacific Rim,” said Selma Holo, director of the USC Fisher Museum.

“Art is a starting point, but never an end point; art opens minds to issues around religion, history, beauty, politics and a host of possible connections and interactions in our global world,” she continued. “Our students and faculty will be able to gather around a specific piece or exhibition and will find themselves entering into conversations that will be life-enhancing and sometimes even life-changing.”

The formal announcement of the alliance was made at an evening event held on Nov. 18 at the Pasadena museum with officials from USC, the museum and the city of Pasadena.

Does the World Need Museums?

Even before the financial crisis hit last year, top museum directors worldwide knew they were operating in a bubble that couldn’t last.

How likely is a national Latino museum?

Professor Roberto Suro led a town hall discussion about the possibility of creating a Smithsonian National Museum of the American Latino on the National Mall in Washington, D.C.