Between 1777 and 1816, the Spanish crown funded five botanical expeditions to survey the flora of its immense imperial empire comprising much of the Americas, the Caribbean and the Philippines. At least 60 naturalists and artists devoted decades of their lives, often enduring harsh conditions and sometimes risking death, to create an archive of nearly 12,000 strikingly beautiful botanical illustrations documenting the flora of the Hispanic world.

“The very existence of this vast visual archive, the huge costs and risks involved in its creation, and the enormous efforts to which naturalists went to employ, train and supervise artists, all suggest that these images were of enormous importance to the Spanish Crown and its imperial administrators,” said Daniela Bleichmar, associate professor of art history and history at the USC Dornsife College of Letters, Arts and Sciences.

However, until now, this remarkable archive had been largely ignored by historians of science art historians, assumed to contain little more than decorative botanical illustrations unworthy of their attention.

“Scholars studying the visual often start from the perspective of ‘What does it look like?’ ” Bleichmar said. “I started from a different perspective: ‘Why make these 12,000 images?’ ”

A year after its publication, Visible Empire (The University of Chicago Press, 2012), the lavishly illustrated monograph Bleichmar wrote about the answers she found to that question, has been awarded the American Historical Association’s 2013 Leo Gershoy Award for “the most outstanding work published in English on any aspect of 17th and 18th century European history.”

“Looking at the list of scholars who are past winners of this award made me feel so honored because they are people whom I deeply admire and respect,” Bleichmar said. “That makes the award very meaningful to me.

“Also, having these themes and topics — which lie outside mainstream scholarship — recognized by this award validates the fact that they are important and can make a valuable contribution to our knowledge and understanding of this period.”

By studying the history of these botanical images, Bleichmar found a window into the worlds of science during the Age of Enlightenment, visual culture and empire. Through innovative interdisciplinary scholarship that bridges the histories of science, visual culture and the Hispanic world, she used the archive to trace two related histories: the little-known history of scientific expeditions in the Hispanic Enlightenment and the history of visual evidence in both science and administration in the early modern Spanish empire.

“This kind of material fell through the scholarly cracks because in the past, historians of science and of art tended to focus on celebrating great geniuses, like Galileo or Michelangelo, who had big revolutionary contributions that everyone agreed were important,” Bleichmar said.

“These utilitarian images did not fall into that category. Also, historians have traditionally paid scant attention to science in the early Hispanic world, holding the view that this period was all about conquistadors, gold and religion, and that nothing much else of interest was going on,” she added. 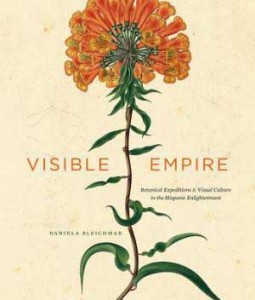 Visible Empire has been awarded the American Historical Association’s 2013 Leo Gershoy Award for “the most outstanding work published in English on any aspect of 17th and 18th century European history.”

Bleichmar, however, found herself drawn to the archive, which is stored inside a temperature-controlled vault in Madrid’s Royal Botanical Garden, because it brought together her diverse interests in the history of science, images and travel.

“When I was looking at images from the late 18th century, I was struck by how many images there were in science at the time. Scientists were constantly communicating, not just in numbers and experiments, but also in visual terms,” she said, noting that today we take for granted the sharing of images via the Internet as an effective communications tool.

Delicately drawn in pencil, or pen and ink, and then painted with tempera, wash or watercolor, the botanical illustrations were created in painstaking detail by teams of artists and naturalists, often working in an assembly-line system.

Researching the textual archive of surviving documents, Bleichmar gained an understanding of just how difficult — and risky — the process of creating the images had been.

“It took a lot of people and a great deal of labor to produce them,” Bleichmar said. “First, you had to find people who could make them, you had to train them in special ways, they had to travel, they had to be provided with materials and they had to work very closely with naturalists. And then, after all that effort, the illustrations had to be shipped across the Atlantic, which was incredibly risky. If it was risky for people, it was even more perilous for drawings or paintings on paper which could rot, get wet or be attacked by insects.”

The difficulty and effort needed to produce the images revealed just how important they were to the naturalists of the period and to the imperial administration which footed the bill, again prompting Bleichmar to ask why they were considered so crucial.

She concluded that creating images provided scientists with an opportunity to study the flora of inaccessible places. Illustrations also allowed flora to travel in more stable form than the plants themselves could. Creating images was a way of crystalizing observations and stabilizing them so that knowledge could travel to different parts of the world and contribute to science.

Imperial administrators of the late 18th century believed the territories — which at that point had belonged to the Spanish empire for almost 300 years — could be rediscovered in a new, scientific way. The images became an important part of making the empire visible. Having it known and seen in this way could lead to having it better, and more profitably, administered, officials argued.

“Scientists at the time wanted to classify plants and contribute to science; they also hoped to identify new species that would also be profitable. Tea, coffee, cinnamon, pepper, nutmeg and medicinal plants such as cinchona were all hugely profitable resources. So profit, governance, science and art were all very closely connected.”

Bleichmar pointed out the importance of examining the political context in which these expeditions took place in order to understand what was perhaps their greatest importance to rulers of the Spanish empire.

By the 18th century, Spain’s imperial dominance was in decline compared to the ascendance of the British and French. For the Spanish Crown, discovering and documenting the flora of its empire was a way of reconquering these territories, thereby recapturing the glory and success of the 16th century when Spain was at the pinnacle of its powers.

“I started with a story that I thought was quite specific — these expeditions to make natural history images — and I ended up with a story that was much bigger,” Bleichmar said. “I discovered that in the Hispanic world, to see was to know and to own. I realized that these images connected science and art to the entire imperial administration. Because the images were ultimately connecting the 18th century back to the 16th, they also illuminated the history of the Spanish empire.”

Chaos and Cosmos: On the Image in Aesthetics and Art History

Amy Von Lintel believes art history goes beyond what hangs on the walls of museums or fills the pages of textbooks. The field is alive, constantly changing and much closer to home than one might think.

The Picassos of Art History

Since its founding in 1913, The Art Bulletin has for the first time tapped a West Coast scholar to lead art history’s premiere journal in the English language.

Flora and fauna from the Spanish empire