Researchers at USC have created a solvent that will dissolve semiconductors safely and cheaply, allowing them to be applied as a thin film that could create the next generation of low-cost electronics.

The problem, until now, is that the only substance that could effectively dissolve semiconductors to form these inks was hydrazine — a highly toxic, explosive liquid used in rocket fuel.

Richard Brutchey and David Webber of the USC Dornsife College of Letters, Arts and Sciences mixed two compounds to create a solvent that effectively dissolves a class of semiconductors known as chalcogenides at room temperature.

“When the two compounds work together, they do something quite remarkable,” said Brutchey, a professor of chemistry at USC Dornsife.

Brutchey and Webber call the solvent an “alkahest,” after a hypothetical universal solvent that alchemists attempted to create to dissolve any and all substances. They’ve patented their alkahest and presented their findings in the Journal of the American Chemical Society on Oct. 15. 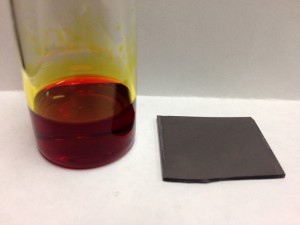 In the paper, they showed how a mixture of 1,2-ethanedithiol (a colorless liquid that smells like rotten cabbage) and 1,2-ethylenediamine (a colorless liquid that smells like ammonia) is able to effectively dissolve a series of nine semiconductors made from combinations of arsenic, antimony, bismuth, sulfur, selenium and tellurium. Such semiconductors are often used in lasers, optics and infrared detectors.

The solution was then applied as a thin film to substrates like glass and silicon and heated, evaporating the solvent and leaving only a high-quality film of crystalline semiconductor — perfect for use in electronics.

“It’s inexpensive and easily scalable,” Brutchey said. “Our chemical understanding of the solvent system and how it works should allow us to expand it to the dissolution of a wide range of materials.”

Funding for the research came from the National Science Foundation and USC Dornsife.

Doing Business on the Electronic Frontier

Recent acquisitions by the USC Libraries are prompted by faculty requests representing a broad range of scholars.

A solution for low-cost electronics