Retired Gen. David Petraeus recently spoke at the USC Gould School of Law, where he introduced a screening of the HBO film Alive Day Memories: Home From Iraq, which features interviews with amputees.

The visit capped off a daylong USC conference addressing the needs of returning veterans and celebrating Petraeus’ new role as professor at the university. 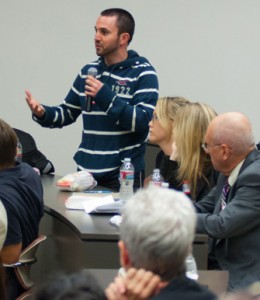 A student asks a question after the screening of Alive Day Memories: Home From Iraq. (USC Photo/Tom Queally)

Co-hosted by USC Gould and the USC Schwarzenegger Institute for State and Global Policy, the screening concluded with a discussion with the veterans who wrote and produced the documentary.

“I hope that as you watch this film here, you too will be inspired by and proud of some true American heroes as I was on innumerable occasions in tough places over the past decade, including after returning from my own tours down range,” Petraeus told the audience. “The men and women who have volunteered to serve since 9/11 have earned the distinction of being labeled America’s new greatest generation. … I can tell you that it was the greatest of privileges to serve with them in the Balkans, in Iraq, in Afghanistan, and in the greater Middle East for nearly seven of my final 10 years in uniform.”

“I want to thank you, Dean Rasmussen, for your leadership here at the Gould School of Law and for your support for the veterans who have attended this exceptional institution that is characteristic of the greater university and is also a hallmark of this superb school,” Petraeus said. “We applaud that and express our appreciation for it.” 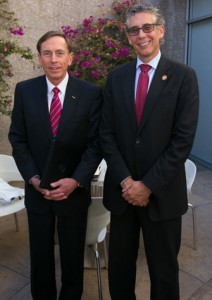 Rasmussen said it was an honor to host Petraeus.

“This really is a great day at the Gould School of Law,” he said. “We have with us today a four-star general, an innovative scholar and a true military hero. …

“For all of his accomplishments, Gen. Petraeus became known as the warrior-scholar — someone who is rigorous, intelligent and bold,” Rasmussen added. “It is certainly a great honor and privilege that now Gen. Petraeus adds another title to his repertoire, that of the Judge Widney Professor here at the University of Southern California. We are very fortunate that he is going to spend his time sharing his insights and ideas with us.”

The film opened the USC Schwarzenegger Institute’s Screening Series, which will bring a variety of films and documentaries to campus and provide discussions with the filmmakers.

Nancy Staudt, USC law and public policy professor and academic director of the USC Schwarzenegger Institute, said it was an honor to launch the film series with Alive Day Memories.

“Our institute just launched about a year ago, and we’re very proud to now introduce our Schwarzenegger Screening Series,” Staudt said. “We recognize that the Schwarzenegger Institute at USC is unique for many reasons, one of which is that we sit at the cross-section of policy, academia and media.

“We plan to bring great films and documentaries to the USC community and provide opportunities to have dialogue with some of the best filmmakers in the world,” she continued. “We’re particularly proud that launching our series, the documentary tonight, is about veterans’ issues, and about the brave men and women that serve in our military. It’s a distinct honor to celebrate this event with Gen. Petraeus and the brave veterans who are in attendance tonight.”

For Petraeus, leadership needs to be affirmative and adaptive

Retired Gen. David Petraeus outlines what he called an “affirmative model of leadership.”

Protein protects cells from stressful forces, and diseases such as muscular dystrophy, by forming ‘nanoclusters’

A team of USC Dornsife scientists finds new evidence of how the protein emerin functions and how it may be linked to a rare and debilitating form of muscular dystrophy.