While studying abroad in the northern Uganda city of Gulu, Molly Beckert ’10 learned that children were dropping out of the nearby primary school at a high rate.

“Families were faced with the decision of whether to send their children to school or to work so they could help feed their family,” said Beckert, who earned her bachelor’s degree in international relations from the USC Dornsife College of Letters, Arts and Sciences.

The epicenter of a 20-year civil war that ended approximately a decade ago, Gulu is still rebuilding its infrastructure, and many of its roughly 150,000 residents grapple with food insecurity.

The father of Beckert host’s family was part of a community group that had an idea to combat hunger — start a sustainable farm on the school grounds where they could grow corn, cassava and beans, among other crops, to support a school lunch program. By providing one meal a day for students, their parents would be relieved of some of the burden of food costs.

To get the operation off the ground, they needed capital, which was difficult to obtain because the community was spearheading the effort instead of an established organization.

“Honestly, I was a little frustrated that no one would give the community a chance,” Beckert said. “It was a fairly simple solution that really had potential. I was so inspired by the fact that they wanted to take control and lead the work.”

After graduation, Beckert decided she would help community members realize their vision. Working with volunteers in Gulu to oversee a pilot project, Beckert founded the nonprofit Echoing Good, which would help the community raise funds from private donors to create a sustainable farm at the Okwir Primary School.

The project’s first fundraising campaign raised $5,000 to build a 10-acre farm, which fed more than 300 children per day. The project is supported by students’ parents who participate in the farm’s upkeep and contribute 500 shillings each — the equivalent of approximately 20 cents in the United States — for the lunch program to hire a cook and purchase other necessities such as spices, pots and pans.

To date, the project has been successful, doubling the size of the farm — and school attendance.

“We increased the student population by 50 percent,” Beckert said. “What we found is that a meal every day is enough incentive for parents to send their children to school. Kids who dropped out of school and never thought that they’d have an education are now in class every day.”

Beckert runs Echoing Good’s operations from her home in Santa Monica, Calif., where she checks in daily with her team in Uganda via email and Skype.

The organization’s name reflects the idea that when people do good, the echoes of that action can be heard around the world.

The nonprofit’s ongoing goal is to provide small grants to communities around the world who have sustainable solutions for addressing the challenges they face.

“What we found is that communities usually have really innovative ideas for solving their own problems,” Beckert said. “Oftentimes their solutions are very cost-effective, and they address the root problem. We basically help them make their idea a reality.”

Uganda was just the beginning for the nonprofit. 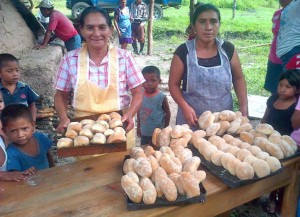 A community in San Jose, Guatemala, whose members wanted to start a small business, approached Beckert with a proposal. The community, as well as surrounding communities, lacked a bakery, and they saw a gap in the market.

“It was really incredible,” Beckert said of the proposal. “They had budgets, they had a business plan. They had everything in place; they just needed someone to give them a chance.”

Echoing Good partnered with the villagers in San Jose to raise $12,500 for the small business, which launched in October. In addition to providing jobs in the community, some profits from the bakery will be reinvested in other community-driven projects.

Beckert, who transferred to USC Dornsife as a sophomore from the University of Colorado at Boulder, said she has always been interested in working in the international realm. Her travels abroad, which included the Semester at Sea program, solidified her interests.

Next spring, Beckert will visit Guatemala and Uganda to monitor other projects. In Gulu, she will meet with her project team to go over budgets and conduct site visits. She plans to interview parents and students to evaluate how their farm is progressing.

As the school farm continues to thrive, interest in the program grows. The Awoo Primary School partnered with Echoing Good in January 2012 to create its own 40-acre farm and lunch program, which feeds more than 900 pupils a day. Beckert said she currently has a list of a dozen schools in northern Uganda that also want to start their own farms.

To make that goal a reality, Echoing Good is raising funds to purchase a tractor. The overhead annual cost of clearing and plowing the land is approximately 40 percent of each school’s budget.

“A tractor is what’s going to make our projects in Uganda completely self-sustaining,” Beckert said. “The hope is that we can get a tractor and then we can scale up our projects really fast.”

Beckert knows there is always more to be achieved.

“It’s certainly been a learning experience,” she said. “It’s the type of work I’ve always dreamed about doing. I feel very thankful that I’m part of these communities’ lives, and I’m very thankful to them.

“In this line of work, you are always thankful and grateful, but you are always exposed to how much more needs to be done. I never feel like the job is done.”

Students take a swipe at hunger

Each semester, USC students head into finals with credits still left on their dining cards — money that goes to waste when the semester ends. A group of students is turning those dollars into food for the LA Mission.

With climate litigation becoming more complicated, the influential Environmental Law Institute turned to the law professor as part of its Climate Judiciary Project.

A simple solution to hunger for their own good