Stephan Haas, professor of physics and astronomy at the USC Dornsife College of Letters, Arts and Sciences, has won a 2013 Friedrich Wilhelm Bessel Research Award, granted by the Alexander von Humboldt Foundation. The award allows Haas to continue his research on quantum systems in Bremen, Germany, for one year.

Haas, a theoretical physicist, has made significant contributions in the areas of quantum magnetism, unconventional superconductivity and quantum engineering. Since the start of the fall semester, he has been in Bremen researching two-dimensional graphene and similar materials at two universities.

With this award, Haas and collaborators Thomas Frauenheim and Tim Wehling of the University of Bremen will work toward the discovery and design of new functional materials to improve modern electronics using graphene — a crystalline form of carbon similar to diamond, graphite and carbon nanotubes.

“This award feels like a reassurance that I’m on the right path,” Haas said from Germany. “At the same time, I feel extremely grateful for the people who nominated me and have worked with me in the past. I’m eternally grateful to the graduate students and postdocs who have worked with me because they have contributed enormously to this research.”

Unlike grants that are predicated upon the completion of future research, the Humboldt award is based on an applicant’s existing body of outstanding research. Winners are expected to continue to produce topical research that will have a seminal influence on their discipline beyond their immediate work.

Candidates must be nominated by two people — either established German academics or former winners of the same award. The award, which is valued at approximately $62,000, promotes research collaborations among Germans and the international scientific community.

Graphene is just one carbon atom thick, one million times thinner than paper. Its two-dimensional structure gives rise to unique properties and its strength, flexibility, and heat and electric conductivity have potential industrial applications.

The discovery of graphene led to the 2010 Nobel Prize in physics. It is related to graphite, found in most pencils, which is the three-dimensional version of the mineral. 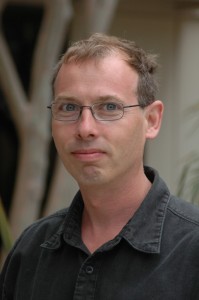 Stephan Haas has received the Friedrich Wilhelm Bessel Research Award, which will allow him to continue his research on quantum systems with two collaborators. (USC Photo/Ben Pack)

“Graphene is a semi-metal and the properties of its electrons are unusual in that they display relativistic effects,” Haas said. “The class of materials I’m working on can do even more than that: They can superconduct and show exotic phases like charge-density waves.

“We are investigating their quantum phase diagram, trying to see how to enhance the superconductive properties of these materials,” he explained. “You can manipulate these sheets and their properties by bringing them in contact with a substrate or adding other atoms. Two-dimensional structural properties are easier to manipulate than in three dimensions because the former is very sensitive to anything you bring it in contact with.”

Drawing on his strong theoretical background, Haas creates sophisticated models of what happens with these materials in their various permutations. Ultimately, the development of new materials like these that are flexible and superconductive could lead to more sophisticated functionality in modern electronics such as cellphones and computers. Scientists say graphene and related materials could boost Internet speeds, serve as a touch-sensitive coating and extend the lives of computers, to name a few benefits.

Haas, former vice dean for research at USC Dornsife and co-director of the USC Dornsife-based Center for Quantum Information Science and Technology, joined the Department of Physics and Astronomy in 1998. His research interests include nanoscience, quantum magnetism, unconventional superconductivity and the properties of quantum-many-body systems.

The three recipients — all electrical and computer engineers — will use the grant money to address the challenge of training artificial intelligence.

The three recipients — all electrical and computer engineers — will use the grant money to address the challenge of training artificial intelligence.

Graphene: the next big thing?