During the official launch of the Economics Leadership Council (ELC) at the USC Dornsife College of Letters, Arts and Sciences, organizers announced that within eight months nearly $8 million had been raised.

ELC was established to enrich and strengthen the student experience; link academic expertise with the marketplace; enhance the reputation of the Department of Economics in the community; and identify opportunities for financial support.

Comprised of prominent USC alumni and friends, ELC connects the Department of Economics to residents of Los Angeles and the surrounding area interested in economics and USC Dornsife.

“ELC will be beneficial to our students by offering internships, financial support for scholarships and by providing contacts with potential employers,” said Geert Ridder, professor and chair of economics. “We hope to benefit from the experience of ELC members in our teaching and make people aware what economics and our department can offer them. Funds we raise will improve the position of our department in the competitive market for talented economists.”

The ceremony was held on Oct. 8 at USC’s University Club.

“In eight short months, we’re off to a great start,” said council member Peter Resnick ’82, former chief operating officer of Precision Dynamics Corp., headquartered in Valencia, Calif. “We’re just getting off the ground and already we have some excellent programs.” 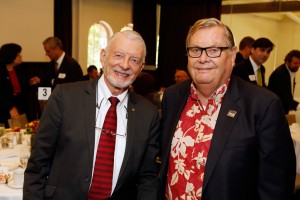 McFadden elaborated on his paper, “The New Science of Pleasure,” which bucks classical economists’ thought that people make choices to maximize pleasure. It’s not that black and white, McFadden said. Drawing from psychology, anthropology, biology and neurology, he said the forces behind preferences can be mercurial.

“Social networks such as information sources, reciprocity and altruism enter human behavior and cannot be ignored,” McFadden said. “There are new opportunities to study the sociality of choice through experiments that manipulate the information provided through social networks, the effect of approval and — through comparative study of isolated societies — the role of cultural and social norms.”

The striking ties between brain physiology and behavior in economic decisions, and new methods for measuring and manipulating brain activity, offer the possibility of powerful experiments in which economic, social and physiological treatments are employed to identify and isolate the causal foundations of economic choice behavior, he said.

“In particular, the ‘warm glow’ attached to bonding and trust in family and social groups seems to be tied to reward pathways in the limbic system that we experience as pleasure,” he said. “It may be this chemistry that has worked with selection to promote social cognition and empathy in humans, giving them the mental capacity to function as social animals in large groups, to organize complex and productive economic systems, and to internalize cultural norms for reciprocity, trust, fairness and altruism.”

The challenge facing economic consumer theory, McFadden concluded, is to use the disparate measurements and experimental methods that have become available to synthesize a new behavioral science of pleasure.

This science should retain the quantitative, predictive features of neoclassical theory in the economic settings where it works well and extend these features into areas of individual sensation of well-being and choice in the context of social network information and approval. That way, the theory can better predict the impact of novel economic policies on consumer well-being, he said.

Simon Wilkie, professor of economics and the liaison between the new council and the department, thanked all participants.

“We hope everyone is excited about the prospects moving forward and continues to stay engaged,” he said.