Fruitvale Station. 12 Years a Slave. The Butler. 42. Mandela. It may seem in 2013 that the critical and popular success of films featuring black lead actors signals that Hollywood is diversifying. But a new study  from the USC Annenberg School for Communication and Journalism shows it’s business as usual when it comes to employing underrepresented races and ethnicities in the industry.

USC Annenberg Professor Stacy Smith and her team analyzed 500 top-grossing films at the U.S. box office over five years (2007, 2008, 2009, 2010 and 2012) and over 20,000 speaking characters. The evidence revealed that in 2012, black or African-Americans represented 10.8 percent of all speaking characters, while Hispanics represented 4.2 percent and Asians 5 percent. In the top-grossing films analyzed from 2012, nearly 40 percent depicted black characters in less than 5 percent of all speaking roles.

“There is still a noticeable lack of diversity across the landscape of popular films,” said Smith, the principal investigator. “This year is the 50th anniversary of the civil rights movement, and the census shows that the population of the United States is more diverse than ever. Our film content, however, depicts something very different.”

African-Americans and blacks are not only outnumbered on screen, but behind the camera as well. Across 565 directors and 500 films, there were just 33 black directors between 2007 and 2012, and only two of those directors are female.

“It is hard to believe that across all of these top directing jobs, there are only two qualified black females. Other talented black female directors exist. Where are they?” Smith asked.

The report also analyzed the nature of diverse portrayals. When they are on screen, female Hispanic characters are more likely than female characters from any other race/ethnicity to be depicted in sexy attire or partially naked. Black males are least likely to be shown as parents or caregivers (26.7 percent) or as romantic partners (43.3 percent). 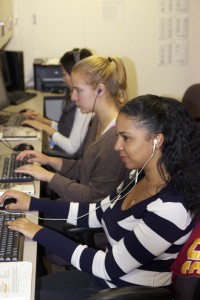 Bridgette Webb, a senior at USC Annenberg, and other students analyze films for the Media, Diversity and Social Change initiative. (Photo/courtesy of USC Annenberg)

“When you see someone who looks like you on screen, it makes you feel like you’re being seen,” said Bridgette Webb, a senior USC Annenberg communication student who works with USC Annenberg’s Media, Diversity and Social Change, the program that conducted the study. “Media ideals are so opposite from how I look that when I see representations or diverse characters, it makes me feel like the media thinks I’m OK.”

Black directors may make an impact on the diversity on screen. When films have a black director, 52.6 percent of speaking characters are black, compared to just 9.9 percent for films with nonblack directors.

“Quite simply, when we see diversity behind the camera, we see a difference in the percentage of diverse characters on screen,” said Marc Choueiti, a co-author of the study. “The question is are these directors encouraged to create more diverse stories that reflect the world? Or is the type of story they are entrusted with an exclusive story about their own racial or ethnic group?”

The mayor of West Hollywood helps USC School of Social Work students explore what it means to be part of the gay, bisexual and transgender community.

More than half the students at USC are US minorities or international students. Through a grant, the university aims to promote cross-cultural communication, making campus a richer atmosphere for all.

James Moore earns the honor for creating new opportunities for women, minority and international students in the transportation industry. It’s the first such award given by the local chapter of the Women’s Transportation Seminar.