Schwarzenegger and Knott took part in three meetings: one with U.S. Secretary of Education Arne Duncan, another hosted by House Majority Whip Kevin McCarthy (R-Calif.) and a third hosted by Senate Majority Leader Harry Reid (D-Nev.). In all, seven U.S. senators and 11 members of the House of Representatives participated in the day’s meetings. Following the discussion with the senators, a press conference was held on Capitol Hill.

The U.S. government has provided money for school districts to partner with nonprofit after-school providers since 1999 through the 21st Century Community Learning Centers initiative.

Schwarzenegger, who leads the USC Schwarzenegger Institute for State and Global Policy at USC Price, founded one of the nation’s largest after-school programs, now called After-School All-Stars, in 1992. It serves close to 100,000 students at 400 Title I schools in 15 major cities, offering a combination of academic support, enrichment and health/fitness programs Monday through Friday from 3 to 6 p.m.

The day concluded with a visit to the After-School All-Stars program at Stuart Hobson Middle School in Washington, D.C.

Schwarzenegger knows how valuable these programs are to youngsters, their families and schools. He was the sponsor of California’s Proposition 49, the state’s after-school safety and education act. This ballot initiative was passed overwhelmingly in 2003 by voters, making California the nation’s leader for providing financial support for schools to run comprehensive after-school programs.

“Having the institute directly influencing policy in Congress is exactly what I envisioned when partnering with USC and the Price School of Public Policy,” said Schwarzenegger, the Governor Downey Professor of State and Global Policy at USC. “Making the case as to why continuing federal support for comprehensive after-school programs is critical to California and our nation’s goal to make sure kids are college and career ready is something I am proud to have championed for over 20 years. With Dean Knott joining us for these important meetings, it adds great credibility to the public policy research supporting these programs.”

USC Price strives to improve the quality of life for people and their communities, and Knott sees support of after-school funding as critically important to advancing community learning and having an impact on social policy.

“From our own neighborhoods here in Los Angeles to those all over the country, the Price School is hoping to help ensure that children everywhere have access to vital programs that will promote their educational success,” Knott said. 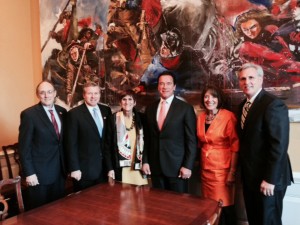 “A core part of the institute’s mission is supporting post-partisanship and working with leaders of both parties on important policy solutions,” Reiss said. “We’ve done this with our symposium supporting the bipartisan group of senators working on immigration reform and now our policy meetings in Washington on the importance of these after-school programs which help our K-12 kids become career and college ready.”

Although there are 8.4 million students currently in after-school programs, 15.1 million children remain unsupervised during these peak hours for juvenile crime, according to the Afterschool Alliance. After-school hours can be a time for trouble or an opportunity to learn new skills, develop relationships with caring adults and prepare for the future.

Schwarzenegger and Knott urged members of Congress to find a separate funding stream for extended-learning time so that it isn’t competing with after-school dollars and to support the 21st Century Community Learning Centers program so that after-school programs become an expectation, not an afterthought.

Rapper Jabari Evans witnessed the violence firsthand in Chicago, and rather than become a statistic himself, decided to do something about it.