But the excitement wasn’t generated for one of the Trojans’ storied athletic programs. Instead, it was to commemorate the university’s courageous and historic commitment to social advocacy through its debate program.

In 1935, USC, then the defending national championship debate team, broke racial barriers to compete against the undefeated all-black Wiley College of Marshall, Texas.

Wiley’s win that year earned it the honor of being the first historically black college to win a national championship — and its debaters set the stage for the civil rights movement. Wiley College’s James Farmer Jr. would later organize Freedom Rides to protest a segregated transportation system.

Now 78 years after the original debate, Wiley’s team, known as the Melvin B. Tolson/Denzel Washington Forensics Society, traveled to Los Angeles for an exhibition against the USC Annenberg Trojan Debate Squad. It was the first time the teams had met at USC since their 1935 debate; last year, USC traveled to Wiley for the first rematch since that year. 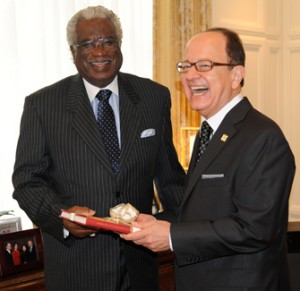 In honor of the groundbreaking 1935 debate, coaches Gordon Stables and Christopher Medina of USC and Wiley College, respectively, selected a social justice-related theme: the merits of affirmative action.

“It is hard to imagine nearly 90 years ago that education narrowed who students are exposed to. It made education less valuable for all students because they learn from each other,” Stables said. “If tonight’s debate is remarkable, it is remarkable because of the role that debate plays in the lives of students, communities and universities.”

The two teams, each consisting of one black and one white student — teams that would have been unheard of in the 1930s — argued the gray areas of racial inequality in college admissions.

“The great thing about the diversity on both of our teams is that it happened by accident. We are a perfect example of the world that those great debaters were fighting for in 1935,” said Wiley College debater Lyle Kleinman.

The Trojan team argued that the role of race should be expanded in university admissions. Its members claimed that the loss of affirmative action has meant a decrease in diverse students and perspectives in college classrooms. Wiley College debaters argued that affirmative action sends unprepared students to college, setting them up to fail. (Teams negotiated debate topics and sides beforehand.)

The lively 40-minute debate outlined the pros and cons of affirmative action in higher education and garnered enthusiastic affirmations and applause from the packed house.

An emotional moment occurred when USC’s Christian Patterson spoke from his personal experience.

“You may call it tokenism when you have one black student or one Latino student in your classroom, but I can tell you from personal experience, when I’m in that classroom, I don’t feel like it’s tokenism,” he said. “I feel like I’m doing something. I feel like I’m telling people about a problem that they would not know anything about if I were not there.”

But Wiley debaters countered that these programs can harm minority students who aren’t ready for college.

“If a student cannot get science books in their elementary classroom, how do you expect them to become nuclear astrophysicists? How do you expect someone to find the cure to cancer when they can’t read?” Kleinman said. “Affirmative action paints a color on failure. … We set them up to fail, and we argue that this is the best policy out there.”

Leading up to their recent meeting, USC and Wiley students had dinner together. They learned that both Wiley debaters were freshmen from California; the USC students were from Utah and Wiley’s home state of Texas.

“[Debate] has helped me see so many perspectives that I wouldn’t have considered before,” Purk said. “Debate is so unique because it gives us the opportunity to understand both sides of an issue.”

“What these young people are doing today dates back thousands of years to Cicero,” Wilson said during his opening remarks prior to the debate. “But it is also a very modern tradition. If we think about debate teams and then we think about social media — what is social media? What is blogging? What is the Internet, other than simply the latest modern opportunity to engage in debate? And to engage in debate that is principled and forthright, that can be critical, is essential for citizenship.

USC continues that 1935 spirit of collaboration by encouraging student debate both here and abroad. The university is teaming up with the George Soros’ Open Society Foundation to develop online debating tools to link schools around the world.

“The purpose is really to teach these kids critical thinking and research skills,” said USC student Jordan Friedman, who greeted visitors to the debate and serves as the head volunteer coordinator for the university’s partnership with the local debate league.

“Students are reading material they are actually engaged in and getting the skills necessary for college,” said Friedman, who added that many high school students also earn debate scholarships.

Scholarships and support have made the difference at Wiley as well. After the release of The Great Debaters, there was a resurgence of interest in debate, and Wiley’s student enrollment has tripled.

The film also changed the life of Nate Parker, the actor who portrayed one of the 1935 Wiley team members and served as judge for the USC exhibition.

“It really changed my perspective in terms of being a part of my community, not only to those who look like me, but the nation at large,” he said. “I have a responsibility to attack any issue I feel is unjust.”

The outcome of the debate was “very close,” but Wiley defeated USC in the end. Despite the loss, Parker said everyone benefits by encouraging future leaders.

“All of the debaters are incredible speakers, their presentation and the preparation was fantastic,” Parker said.

“One of tonight’s debaters is interested in political office. These are the leaders of tomorrow, and we have to cultivate them. I think we did that by filling this room up, by being supportive in the debate.”

Debate Squad to Compete at Smithsonian

The USC Trojan Debate Squad will participate in a debate about health care and the economy at the Smithsonian Institute.

Garcetti, Greuel to face off in live TV debate at USC

Los Angeles mayoral hopefuls Eric Garcetti and Wendy Greuel will face off in a televised debate and town hall at the Galen Center on May 5.

The 2019 NCAA 400-meter hurdles champion — who has a 4.0 GPA in her public policy graduate program — is USC’s only Team Member of the Year honoree since the College Sports Information Directors of America began the award in 1996.