Theatrical voices filled the USC Annenberg School for Communication and Journalism Auditorium on Oct. 11 as about a dozen high school and USC student actors performed “Moby-Dick: Then and Now,” a USC Visions and Voices event.

The play, written and directed by playwright and actor Ricardo Pitts-Wiley, was originally produced at the Mixed Magic Theatre in R.I., where it first caught the attention of Henry Jenkins, Provost Professor of Communication, Journalism and Cinematic Arts at USC Annenberg.

“I very much wanted to bring this performance to LA,” said Jenkins, who made this a reality in part through the Annenberg Innovation Lab.

Jenkins, who joined USC Annenberg in 2009, directed the Comparative Media Studies graduate program at the Massachusetts Institute of Technology for 16 years. His most recent book, Reading in a Participatory Culture: Remixing Moby-Dick in the English Classroom, which was co-authored with MIT professor and Herman Melville specialist Wyn Kelley, features Pitts-Wiley’s efforts to make literature, specifically Moby-Dick, more accessible to incarcerated youth.

“We realized that what I was trying to do and what they were trying to do was very closely related. And a partnership has developed,” Pitts-Wiley told the audience of his collaboration with Jenkins and his Project New Media Literacies teams at MIT and USC, a project funded by the MacArthur Foundation to explore how youth learn outside of traditional classroom settings. Project New Media Literacies, which started at MIT, was led by Erin Reilly, who now oversees its development at USC.

Both Jenkins and Pitts-Wiley view reading literature as participatory and have recognized the education potential of “remixing” to make classic literature more relatable and relevant to modern youth. But, Pitts-Wiley emphasized, he takes great effort to retell classic stories in such a way that they remain true to their source — and he tries to teach students to do the same. 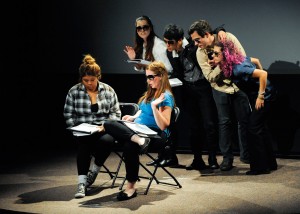 The play is a “remix” of the classic story to make it more relatable and relevant to modern youth. (USC Photo/Gus Ruelas)

“Melville acknowledged where things came from, and I think it’s so important for young people to understand that just because you have a computer and can go grab something [from the Internet] doesn’t mean that you’re not responsible for knowing where it came from,” Pitts-Wiley said. “It’s not just yours because you can use it, and also, if you take the time to figure out where it comes from, it gains greater value.”

Jenkins emphasized the difference between remixing classic literature and plagiarizing the works of other authors, a distinction that can sometimes create confusion for teachers when first introduced to the concept.

“A remix knows where it comes from,” said Jenkins, noting that Moby-Dick itself is an allusion to the Bible, among other sources. “It’s grounded in history; it’s quoting things for a reason. Plagiarism is simply copying: It tries to mask where it comes from. In my mind, that’s a fundamental, ethical difference between the two. Modern culture is built on remixing.”

In “Moby-Dick: Then and Now,” the traditional telling of Melville’s Moby-Dick plays out on one half of the stage, while on the other half, Pitts-Wiley’s reimagining of the story as a tale of loss and revenge deeply entrenched within 21st-century urban gang culture comes to life.

In the updated version, Captain Ahab has become Alba, a teenage girl whose brother was killed after becoming caught up in the drug trade. Instead of the whale of the original story, Alba’s nemesis and object of revenge is WhiteThing, a mysterious entity which appears in a different form to each who view it and comes to represent the international drug cartel, which has many “agents” that impact people’s lives.

The “now” cast incorporates modern slang, popular culture references and allusions to topics such as consumerism, drug use and street violence, which Pitts-Wiley acknowledged as relevant to many youth today and is inspired by the original group of incarcerated students he worked with in R.I.

“These young people not only read [Moby-Dick], but they read it closely,” said Pitts-Wiley. “Even though I thought I had a pretty good idea of what I wanted to do with the novel, they really released my imagination.”

In addition to the contrast between the costumes of the two sets of actors — seafaring garb for the “then” group, jeans and tennis shoes for the “now”— Pitts-Wiley also chose to make two groups demographically distinctive. Drawing on the idea of Melville as a “dead white male writer,” Pitts-Wiley cast many of the “then” actors, in most performances, as older and white, with the majority of actors drawn from USC’s own theater program. Conversely the “now” cast was deliberately chosen to be mixed race and younger, and most of the students were sourced from Gertz-Ressler High School and the Los Angeles High School of the Arts.

Both casts featured many female members, and several of the men’s roles were played by women, a choice which, according to Pitts-Wiley, is key to the retelling of the tale and addressing the criticism that Melville’s classic novel only features male characters.

“Making Alba a female character was important because I wanted to be able to illustrate that the passion and the desire to exact revenge on something that has hurt you is not just limited to men,” he said. “And also I didn’t want it to be a comparison of two characters. By making Alba female, it became just two captains … and in some ways I think it shows the capacity of female leadership to be hardcore, too.”

Another notable aspect of the performance was that it was the result of only five days of rehearsing by the actors, who were brought together with help from USC Annenberg graduate student Alexandrina Agloro. 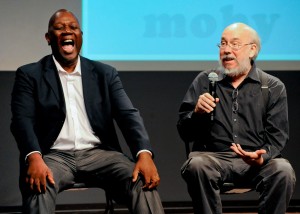 The performance was followed by a Q-and-A session with Ricardo Pitts-Wiley and Henry Jenkins. (USC Photo/Gus Ruelas)

“To think that [Pitts-Wiley] put this together in five days and could draw such great stuff out of a remarkable group of students really blows my mind,” Jenkins said. “And obviously the ideas of the play are very relevant to South Central Los Angeles, and it’s so great that the show features students from local high schools and that their parents are here to see them tonight. It really bridges a divide.”

The 90-minute performance was followed by a short Q-and-A session with both Jenkins and Pitts-Wiley, during which the latter discussed why he feels there’s such a need for retelling classic literature.

“Teachers teach the literature that was important to them, and to their teachers,” he said. “But I’m not sure they’re asking enough what’s important to young people.”

This idea will carry over into Pitts-Wiley’s next project, a remixing of Mary Shelley’s Frankenstein. In addition to being a playwright, songwriter and author, Pitts-Wiley is currently in residency at USC this fall.

“Moby-Dick: Then and Now” was Jenkins’ second Visions and Voices event, and he expressed an interest in bringing more remixing to USC. Given the reaction from audience, cast and crew members following the performance, future events will likely be well-received.

“I’d never read Moby-Dick,” said Amber Espinosa-Jones, a junior theater major who provided technical assistance for the production. “There’s a reason why I usually don’t remember most of the books I read. But this retelling is kind of genius, if you think about it. I never would have thought to present the book this way.”

Deanna Morgan, a sophomore theater major and member of the “then” cast, agreed: “The way [Pitts-Wiley] presents the story is new. I feel like people my age have so much shorter attention spans, and we learn a lot visually and through media, so there’s a reason that something like this is memorable.”

A life in the theater

Before the Music Center of Los Angeles County became one of the largest and most highly regarded performing arts destinations in the country, Gordon Davidson remembered a time when downtown wasn’t as vibrant and treasured as it is today.

Students use a class to raise awareness about housing conditions in nearby neighborhoods.

🎧 ‘Unstructured’: How USC student-athletes coped with unexpected time on their own

Everyone’s been focused on health and well-being this year, and USC student-athletes are no different. Hear Trojans including Rai Benjamin and Angela Kulikov share how they coped without teammates and even their sports.

USC Dornsife’s Sabina Zonno and Lynn Dodd have received a National Endowment for the Humanities grant to develop an immersive world around a Renaissance-era manuscript.

California appears to be in for a dry, warm winter

La Niña conditions in the Pacific Ocean may lead to sandals and sunglasses at Christmastime. USC experts explain what such warm weather means for the state’s water supply and wildlife.

USC wave expert Adam Fincham assembled a team to bring a little science to a big-wave contest, with bragging rights and prize money on the line.