With a theme like “Trojan Family Values,” it’s no wonder Trojan Family Weekend drew thousands of families and friends from near and far to USC for the four-day event held Oct. 24-27. Families see the event as an informative way to stay connected to the university while spending quality time with their sons and daughters — something these families clearly value.

For celebrity parents, especially those whose jobs require frequent national and international travel, visiting their children’s schools can be especially challenging. But CNN correspondent and USC dad Gary Tuchman has found a way to be with his children as part of Trojan Family Weekend for four years. When Tuchman’s daughter Lindsay enrolled at USC in 2009, he was invited to speak about what goes on behind the scenes at CNN, and he’s been a featured speaker ever since. Lindsay graduated last May from the USC Annenberg School for Communication and Journalism, and her younger brother Daniel is now a sophomore at the USC School of Cinematic Arts.

“We’re proud to be Trojan parents,” Tuchman said. “We think the University of Southern California has been a remarkable experience for our daughter and our son. When you hear the term ‘Trojan Family,’ you literally feel like it’s another family. It’s really changed our lives in such positive ways.” 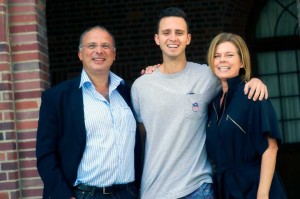 Laura and Phillipe Metoudi traveled from Hong Kong to spend the weekend with their son Daniel, a sophomore majoring in business administration at the USC Marshall School of Business. Laura Metoudi was concerned that being an international parent would make it harder to stay connected, but she solved that problem by joining the executive board of the Hong Kong Parents Association, which is “very, very big in Hong Kong,” she said.

“One of the reasons Daniel decided to go to USC is because the school has such an international presence,” said Laura Metoudi, who moved to Hong Kong 25 years ago with her husband. “Our son did a gap year in China before he came here, and I think it cemented his strong desire to be at USC.”

Daniel, born to an American mother and French father, said it took a little time to adjust to life in Los Angeles.

“People don’t really view me as an international student because I’m American, but it really is a different culture for me,” he explained. “I had to get used to social differences and saying things like ‘bro’ or ‘dude,’ because I went to a British high school and there we say ‘mate.’ ”

Daniel said he has now adapted and is enjoying USC, which was his first choice after visiting 25 colleges while in high school. 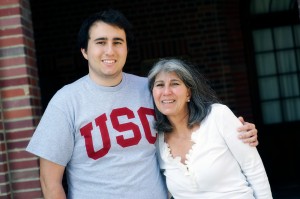 Unlike the Metoudi family, Michele Chalfant’s family traveled just minutes from its Hancock Park home to USC for the weekend festivities. It’s a trip she’s been making every year since 2006 when Jamie, the first of her three sons to attend USC, started his freshman year.

Jamie graduated from the USC Viterbi School of Engineering in 2010 with a Bachelor of Science in biomedical engineering and was a Discovery Scholar. He is now in medical school at the Keck School of Medicine of USC with plans to become a radiologist. Second son Cameron graduated last May with a Bachelor of Science in human development and aging from the USC Davis School of Gerontology and received the Order of Troy, and little brother Duncan is a sophomore at the USC Dornsife College of Letters, Arts and Sciences.

Chalfant said her sons were actually “brainwashed to attend UCLA because my father graduated from the first engineering class at UCLA,” but Jamie had other ideas.

“When Jamie applied, he said, ‘You know, I want to stay here in California, and USC’s engineering school is top rated,’” Chalfant explained. “Once Jamie went, the other two saw the benefit of being right here close to home. We’ve had a lot of fun. The school has been very good to our boys.”

A USC tram driver’s long-term service fuels the quality education for his children and makes him a valued member of the Trojan family.