A group of U.S. Navy sailors from the USS Benfold toured the USC Institute for Creative Technologies (ICT) to see some of the latest examples of virtual reality technologies that could one day be installed on ships. The visit was part of ICT’s participation in Project Athena, a Benfold-based initiative to improve the Navy through innovative technology.

“These guys have great energy and ideas,” said Todd Richmond, ICT’s director of advanced prototype development and transition. “We hope to serve as a lab that can collaborate with them to make some of those ideas a reality.”

Work along those lines has already begun. When a Navy ensign proposed developing a system to improve the way Navy ships identify where sounds are coming from in low-visibility conditions, ICT’s Mixed Reality Lab (MxR) developed a working prototype using a Microsoft Kinect and a smartphone. 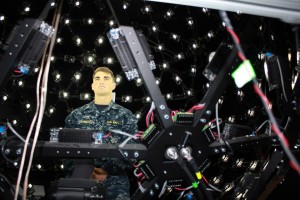 A sailor from the USS Benfold sits in ICT’s Light Stage, an LED-filled dome used to create realistic digital doubles. (Photo/courtesy of ICT)

The idea took the top prize in an Athena event held earlier this year and has led to continued conversations between USC researchers and the Benfold sailors, who got a firsthand look at several projects, including the ICT Graphics Lab’s advances in creating realistic digital doubles and the MxR Lab’s breakthroughs in data display techniques.

“Sailors have to interact with each other and all kinds of information and situations, often in small physical spaces,” Richmond said. “When you fold virtual spaces into the mix, you get limitless possibilities, but also numerous challenges.

“It is valuable to hear firsthand from them what their current problems are,” he added, “and then work directly with them to try to solve them now and in the future.”