For the past six years, Shrikanth Narayanan has leveraged engineering and quantitative analytics to objectively improve the diagnosis and treatment of autism, a neurological condition that impairs communication, the ability to form relationships and respond appropriately to one’s surroundings.

The Andrew J. Viterbi Professor of Engineering at the USC Viterbi School of Engineering and his interdisciplinary team are at the vanguard of a new field called behavioral signal processing (BSP) and informatics. BSP aims to capture, quantify and interpret human behavior, both overt and covert, through the use of engineering and computing advances. 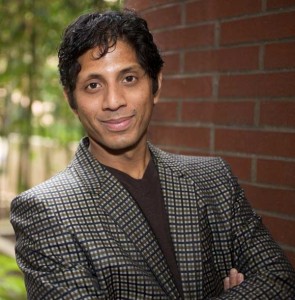 Shrikanth Narayanan is helping to improve the diagnoses of autism through a new field called behavioral signal processing and informatics. (Photo/Jon Vidar)

By sifting through massive amounts of data captured by videotape, audio recordings and physiological sensors, they have objectively and consistently evaluated vocal synchronization, word choice, pauses, facial gestures and minute physiological changes in helping to “understand autism in detail and ways that weren’t possible before,” he said.

“We want to further empower psychologists, both researchers and clinicians, with scientific data and engineering techniques that would further enhance their work,” Narayanan added.

Autism has become the most commonly diagnosed childhood disorder, with autism spectrum disorders now affecting about one in every 88 in the United States, according to a 2012 report by the Centers for Disease Control and Prevention. The U.S. Department of Education statistics show that diagnoses are increasing at a rate of 10 percent to 17 percent per year. While there is no known cure for autism, early intervention can have a positive effect on later development.

Given those realities, Narayanan, whose work has received support by the National Science Foundation’s Expeditions in Computing, among others, said he feels strongly motivated to help decode the puzzle that is autism.

Recently, Narayanan and his research collaborators, Ruth Grossman of Emerson College and Angeliki Metallinou, one of his former PhD students, have found that children with high-functioning autism make facial gestures that lead others to describe them as awkward.

The research suggests that such children often display asymmetrical and asynchronous facial movements. For instance, the left and right parts of their faces or the lower and upper parts might fail to move in synchrony when they smile. These children also have jerky and “rough” head motions. Through motion-capture technology and the application of statistical modeling, the research team has successfully captured and mathematically quantified their movements.

“Knowing that timing’s off and facial movements are rough and asymmetrical can help with further individualizing diagnosis and treatment plans,” Narayanan said.

High-functioning autistic children, the fastest growing subset of kids with autism, possess good cognitive and language skills and the capacity to succeed, said Grossman, assistant professor in Emerson’s Department of Communication Sciences and Disorders. However, their awkwardness and people’s reaction to it make it difficult for them to succeed in school, find a job and keep one.

The ability to objectively quantify awkwardness increases the likelihood of “finding an intervention target to reduce some of the awkwardness that comes across,” thereby making it easier for these children to integrate into society, Grossman added.

Narayanan has also turned his attention to the interaction between autistic children and their therapists. By measuring and analyzing physiological cues, such as heart rate variability and electrodermal activity, he and his collaborators believe that researchers and clinicians can peer beneath the surface to gauge whether the therapist — or even the type of therapy — is a good fit.

This groundbreaking work, which advances the use of physiological signals in the study of autism, is part of a new collaboration between autism expert Connie Kasari of the University of California, Los Angeles; Matthew Goodwin of Northeastern University; and Narayanan. Narayanan’s doctoral student Theodora Chaspari is also a key member of the team.

“Given how complicated the kids are behaviorally, the analytics can help tie it all together,” Kasari said.

For example, a child might seem perfectly fine during a session, leading the psychologist to conclude he or she is making progress. However, access to wrist sensors might reveal electrodermal activity or a pulse rate indicating elevated stress or anxiety. That information, Narayanan said, can provide a fuller and more nuanced picture than does observation alone, leading to more effective clinical approaches.

What does successful therapy look like? If the patient and therapist both appear to synergistically interact with each another — and their physiological indicators are also in sync — they might be a good match, he added.

In addition, Narayanan and his team have recently shown how vocal patterns of a psychologist interacting with a child being diagnosed for autism provide valuable insights about the overall diagnosis. Their work, which is to appear in the Journal of Speech, Language, and Hearing Research, underscores the promise of engineering in providing novel insights to experts. Narayanan’s doctoral student Daniel Bone led the study.

The three-day gathering at USC attracts top neuroscientists from across the country to discuss developmental disorders.

USC faculty and community experts are slated to convene on March 9 at the USC Occupational Science Symposium to share research and perspectives on autism and autism spectrum disorders with an audience of university colleagues and students, health professionals and public advocates.