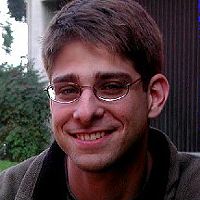 The study by USC’s Noah Rosenberg and colleagues suggested that only a small fraction of genetic traits are unique to specific groups, revealing how genetically similar the world’s inhabitants are.

A study of human populations by a USC researcher and his international colleagues has been named the best biomedical research paper of the year by the London-based scientific journal The Lancet.

The genetic study by USC scientist Noah Rosenberg and his colleagues, one of the largest of its kind, demonstrated that individuals’ geographic ancestry can be accurately inferred from DNA.

The study suggested that only a small fraction of genetic traits are unique to specific groups, revealing how genetically similar the world’s inhabitants are.

Despite such similarities, DNA can play a vital role in identifying the geographic region from which one’s ancestors came.

The original findings appeared in the Dec. 20, 2002 issue of Science.

“In working on this project, we were very fortunate to have had access to an excellent collection of genetic samples from around the world,” said Rosenberg, a scientist in the biological sciences department of USC’s College of Letters, Arts & Sciences.

“Our work is only an initial step toward understanding the relationship between population ancestry and genetic disease,” Rosenberg said. ”We hope that future collaborations can link anthropology and genetics to make advances in medicine.”

Rosenberg’s colleagues included scientists in France and Russia. In the U.S., his team included researchers from Stanford, the University of Chicago and Yale.

The winning paper was chosen by editors of The Lancet. “The paper by Rosenberg et al has two messages of utmost importance: one generally biological, even humanistic, and one methodological,” said the editors.

“The general biological lesson is that the overwhelming source of human genetic variation is between individuals and not between ethnic groups.

“In the paper this becomes even clearer by the finding that there are no absolute genetic differences between ethnic groups: the differences that exist are in relative frequencies only,” the editors said.

“The methodological lesson is that for genetic risk assessment, it follows that investigators can use standard epidemiological study designs, provided self-reported ethnic background is taken into account: For such risk assessment one should not worry about ‘genetic admixture.’

“The most enlightening aspect of the paper, however, is the insight that it gives in the ‘genetic structure of human populations’ – the very title of the paper,” the editors said.

Other nominated papers included the identification of the SARS coronavirus (printed in Lancet), a vaccine trial of the human papilloma virus (New England Journal of Medicine) and the Million Women Study highlighting the increased risk of breast cancer from combination hormone replacement therapy (Lancet).

“This is a fatal flaw in, for example, the Nobel [Prize] awards. With this prize, we aim to salute truly first-class advances in thinking or practice which would otherwise go unnoticed by the contemporary establishment of science.”

What makes a healthy city?

Around the world, people are using a USC Price professor’s research to make their cities healthier and more sustainable.

Lewis Lawyer wrote the first published book on the grammar of Patwin, spoken by indigenous people for hundreds of years and now undergoing a revitalization effort.