At the time he was shooting photos during the 1960s, photographer Lawrence Schiller said he had no idea they would be so memorable.

“History made my pictures important, not me,” he said, speaking on the phone from New York City.

Scrolling through Schiller’s photographic archive is like viewing the subconscious tickertape of America in the middle of the 20th century: There’s Marilyn Monroe, nude, in a swimming pool; there’s the National Guard rolling into Los Angeles during the Watts riots; there’s Robert F. Kennedy sleeping on the floor of his private jet during his final campaign. There are dozens of luminous subjects: Muhammad Ali, Patty Hearst, the Jackson Five.

“I don’t consider myself one of the great photojournalists of my time. I’m just a worker,” Schiller said. “I’m an idea man — I don’t like being monkey see, monkey do.”

Throughout the fall and spring semesters during this academic year, the USC Annenberg School for Communication and Journalism is exhibiting some of the distinctive photographs from Schiller’s 60-year career. On Oct. 24, the school will host a small reception at 3 p.m. in honor of the exhibition. Guests are welcome, and light refreshments will be served. No RSVP is required.

Despite a reluctance to acknowledge himself, Schiller’s work has captured the pulse of American culture ever since he started working as a photojournalist as a teenager. He approached shoots differently than most photographers, even doing the exact opposite, he explained.

“I do distortion, I blur, I want to know what [the subject’s] all about,” Schiller said. 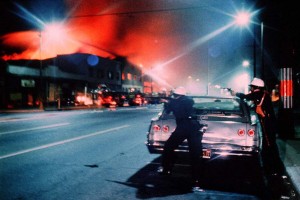 Schiller’s work stretches beyond photography: He’s directed films, documentaries, TV series and has written books. When the iPad first came out, he was asked to create an app that would serve as a model for other artists wanting to use the device. The Lawrence Schiller app presents a retrospective of his life and work, as told by Schiller himself in short video clips.

“When the app first came out, people wanted to know how I’d done it,” he recalled. “I did it all myself. I see it as a building block for other great apps to come,” he said.

Schiller has observed the shift of photojournalism from more of an art form to a medium of information dissemination.

“This past decade, the camera has lost its tip of the paint brush. Now everyone’s inundated by competition,” Schiller said.

He also said that he feels that the increased number of perspectives in photography benefits society’s ability to understand difficult moments in history.

“There’s nothing wrong with [social media],” he said. “Technology steals time from you. There’s less art, more information. Maybe [photojournalism] is more honest without the art in it.”

The seventh annual Louis Galen Artletics Exhibition, a showcase of artwork by 15 Trojan student-athletes created in USC Roski School of Fine Arts classes, will be on display in the Galen Center’s Hall of Fame from Feb. 1 to March 12.

USC School of Architecture alumnus Michael Leung ’09 received an AIA Award of Distinction and a $1,000 scholarship for his Fog Harvesting Hydroponic Farm design at the AIA/LA 2X8:Verge Student Exhibition.

An Art in the Village exhibition

USC experts remember the events that led up to the violence and protests, and consider more recent violence against Blacks including George Floyd and Eric Garner and fatal confrontations between vigilantes and Black citizens.