A common genetic variant that affects one in three people significantly increases the risk of colorectal cancer from the consumption of red meat and processed meat, according to a study presented at the annual American Society of Human Genetics meeting, the largest gathering of human geneticists in the world.

In addition to identifying a gene that raises risk for colorectal cancer from eating red or processed meat, the study — the first to identify the interactions of genes and diet on a genome-wide scale — also revealed another specific genetic variation that appears to modify whether eating more fruits, vegetables and fiber actually lowers your colorectal cancer risk.

“Diet is a modifiable risk factor for colorectal cancer. Our study is the first to understand whether some individuals are at higher or lower risk based on their genomic profile,” said lead author Jane Figueiredo, assistant professor of preventive medicine at the Keck School of Medicine of USC. “This information can help us better understand the biology and maybe in the future lead to targeted prevention strategies.

“But we are not saying that if you don’t have the genetic variant that you should eat all the red meat you’d like,” she added. “People with the genetic variant allele have an even higher increased risk of colorectal cancer if they consume high levels of processed meat, but the baseline risk associated with meat is already pretty bad.”

Reports about how certain foods may lower or raise the risk for certain diseases, such as cancer, are familiar to many people. But how our personal genetic variations modify the effects of diet on disease has not yet been thoroughly investigated, said senior author Ulrike Peters of the public health sciences division at the Fred Hutchinson Cancer Research Center.

The researchers systematically searched the more than 2.7 million genetic sequences for interactions with consumption of red and processed meat. The study looked at 9,287 patients with colorectal cancer and a control group of 9,117 individuals without cancer.

The risk of colorectal cancer associated with processed meat was significantly higher among people with the genetic variant rs4143094, the study showed. This variant is located on the same chromosome 10 region that includes GATA3, a transcription factor gene previously linked to several forms of cancer. The transcription factor encoded by this gene normally plays a role in the immune system, but it carries this genetic variant in about 36 percent of the population.

The researchers speculated that the digestion of processed meat may promote an immunological or inflammatory response that may trigger tumor development. The GATA3 transcription factor normally would help suppress the immunological or inflammatory response. However, if the GATA3 gene region contains a genetic variant, it may encode a dysregulated transcription factor that impacts its ability to suppress the response.

But other genetic vatiants may be beneficial: On chromosome 8, another statistically significant diet-gene interaction was found in variant rs1269486. For people with this variant, eating fruits and veggies may be even better when it comes to colorectal cancer risk, the research showed. 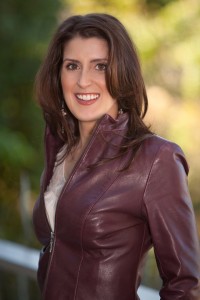 The study is part of an ongoing collaboration among multiple worldwide institutions, including the international National Institutes of Health (NIH)-funded Genetics and Epidemiology of Colorectal Cancer Consortium (GECCO).

“GECCO aims to continue to discover additional colorectal cancer-related variants by investigating how genetic variants are modified by other environmental and lifestyle risk factors, including biomarkers, as well as how they influence patient treatment response and survival,” Peters said, emphasizing how much further research is required to uncover the specific mechanisms by which genes modulate the intake of certain foods on colorectal cancer risk.

Colorectal cancer is a multifactorial disease attributed to lifestyle, environmental and genetic causes, and the third leading cause of cancer death in men and women across most racial groups. More than 30 genetic susceptibility alleles for colorectal cancer have been pinpointed throughout the genome. They include rare variants that have a strong impact on risk and common variants that are low-risk.

“Colorectal cancer is a disease that is strongly influenced by certain types of diets,” Figueiredo said. “We’re showing the biological underpinnings of these correlations, and understand whether genetic variation may make some people more or less susceptible to certain carcinogens in food, which may have future important implications for prevention and population health.”

USC has announced an expansion of cancer care facilities made possible by a $15 million donation from the Kenneth T. and Eileen L. Norris Foundation.

A five-year, $1.4 million study led by USC researchers will investigate the role of perivascular spaces in brain function across the human lifespan.

“Jaguar Jon” excelled as both a running back and punt and kickoff returner.