Some 20 centuries ago, an ancient Roman was entombed in a mausoleum along the road leading to the sea. A countryside burial wasn’t unusual, since it was forbidden in Rome to bury bodies inside the city. What was odd is what happened there in the centuries that followed.

USC students got a taste of the Italian mystery last summer. USC’s archaeological excavation team went into the field at Ostia Antica (about 16 miles southwest of Rome) led by John Pollini, professor of classical art and archaeology in the Department of Art History. Seven undergraduate students joined an international group excavating two areas just outside the ancient town and port of Rome under the auspices of the American Institute for Roman Culture. 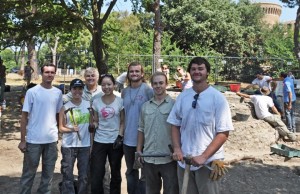 USC students and faculty learned firsthand about Roman life on a dig in Italy. (Photo/Courtesy of John Pollini)

After a week of walking tours of museums and sites in Rome and nearby Ostia, the students learned the basic methodology of field archaeology in a five-week dig that focused on two areas (“A” and “B”) in Parco dei Ravennati, a public green space located between the ancient town of Ostia and an imposing Renaissance castle built by Pope Julius II.

In area “A,” students worked on what appears to have been a late Roman house dating from about fourth century A.D. There they found a spectacular room with a beautiful floor made up of multicolored marble panels cut into different geometric shapes, Pollini said, as well as frescoed wall paintings, preserved only a few feet above the level of the floor. Next year, researchers will uncover more of this structure. The team spent most of its time working in area “B,” where a circular mausoleum from the late Republican or early Imperial periods (late first century B.C. to early first century A.D.) was excavated. This Roman tomb was built along a stretch of Via Ostiensis, the main road between Rome and Ostia.

The subsequent history of the mausoleum turned out to be fascinating, Pollini said. In the late antique period — probably around the fifth century — Christians turned the mausoleum into some sort of octagonal structure, the function of which is still to be determined. Some centuries later in the Middle Ages, Christians used the structure for burials, as indicated by skeletal remains and small finds from this period. Other Christian graves, including infant burials, were also found near the converted octagonal structure, suggesting this area served as a Christian cemetery, he added.

“About four years ago, the mound-like remains of the mausoleum were again used by the local Christian community of Ostia to serve as a simulated Golgotha for the mock crucifixion of Christ as part of their Easter passion play,” Pollini said.

To stabilize the cross, a metal socket, which seems to have been part of a mount for a German World War II anti-aircraft gun, was cemented into the top of the mausoleum. Preservationists plan to remove this modern installation and close off this area as an official archaeological site to prevent further misuse and damage, with attention being given to conservation of the site.

“At the end of the excavation, Italian TV and the press came to film this year’s discoveries,” Pollini said.

Interested in the USC Department of Art History excavation course next June and July? Contact John Pollini by email to learn more.

I enrolled in Professor Pollini’s AHIS 325 summer Roman excavation class for the opportunity to live in Rome for a summer and learn the basics of the interesting international field of archaeology. But what I received was much, much greater than that — a perfect summer experience.

The experience was so valuable because all, and I mean all, the work was done by the students rather than hired workmen. Many archaeological field schools still push professional expectations onto their students and offer little instruction, and later merely clean up the mess; but the archaeologists gave us the time and guidance to really feel comfortable digging and documenting an archaeological site. This is especially important considering the destructive capabilities of a poorly trained archaeologist. We were taught to always think about our next move and to document our thoughts whenever possible.

But beyond the comprehensive academics, consummate professionalism and scenic views, the class brought me closer to a whole wide world of people my age interested in all the same things. We all quickly became friends over the course of a few fine Italian meals and a couple of grueling days traversing Rome. There were more than a few things to bond over: our love of classical history, the grandeur of Rome, TV, movies, music and, of course, simply getting around in a foreign country. After six weeks, it was genuinely hard to say goodbye. Luckily, we’ve been able to keep in touch, and some of us are planning to meet up in New York this January.

Although I will not be pursuing archaeology as a career (I am a student in the School of Cinematic Arts), I am incredibly grateful to have had the opportunity to live in Rome and take part in an archaeological dig. The memories are among my fondest.

A team of USC Dornsife archaeologists and students help to preserve a part of history at Hollywood Park.

When in Rome, undergraduates dig into history