Three Trojans have been selected as fellows-elect of the National Academy of Public Administration (NAPA), an independent, nonpartisan organization that works in a consultative capacity with federal officials.

Ernest J. Wilson III, dean of the USC Annenberg School for Communication; Raphael Bostic, director of the Judith and John Bedrosian Center on Governance and Public Enterprise at the USC Price School of Public Policy; and James Ferris, director of the Center on Philanthropy and Public Policy at USC Price, will be inducted among the academy’s 37 new fellows on Nov. 14 in Washington, D.C.

“I am in wonderful company,” said Wilson of the two USC Price inductees and his other fellow inductees. “Communication is at the center of everything in the Information Age,” he added. “My invitation to serve here is further validation of both that centrality and of the excellence, prominence and centrality of USC Annenberg.”

Established in 1967, the congressionally chartered academy has close to 800 fellows from a range of private- and public-sector industries. Members of Congress, former presidential cabinet members, business executives, public administrators and notable academics comprise the academy.

“This distinguished award recognizes Jim Ferris and Raphael Bostic for their significant scholarly and public service contributions to the field of public administration,” said USC Price Dean Jack H. Knott, who was elected a NAPA fellow in 2007. “As two exemplars of knowledge in action, this honor is indeed very well deserved.” 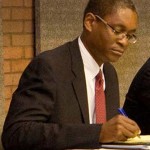 The academy’s underlying responsibility is to provide federal departments and agencies with assistance on nationally pressing administrative issues. The bulk of its work comes at the request of congressional committees and other government entities. NAPA’s specific organizational objectives include improving the effectiveness of public programs, strengthening cross-sector collaborations, providing transparency to government operations and creating long-term macroeconomic solutions.

Fellows work to fulfill those goals by developing organizational assessments, strategy measures, performance management systems and implementation strategies to combat environmental, fiscal and other national concerns. They may also be called upon for congressional testimony, online stakeholder engagement or to create in-depth administrative studies and analyses. 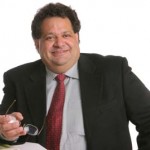 “The academy is honored to add these leaders in public administration to its ranks,” said Dan Blair, president and CEO of NAPA. “Elected by their peers, these inductees will drive the important work of the academy in addressing emerging issues in government.”

Trojans to serve as fellows of national academy