In 1963, Rafael “Ray” Bowen DDS ’53 published “Properties of a Silica-Reinforced Polymer for Dental Restorations” in the Journal of the American Dental Association (JADA). Essentially introducing the idea of dental composites to the world, it would eventually be considered one of the most pioneering dental articles ever published in the journal.

In honor of JADA’s centennial year, the journal has republished Bowen’s article as well as other landmark dental studies, pairing each of them with expert commentary about the study’s impact on the dental profession. Bowen’s article, which appeared in the August issue of JADA, was discussed by Stephen Bayne, professor at the University of Michigan School of Dentistry and member of the JADA editorial board.

Bowen is currently working to improve dental composite materials in the American Dental Association Foundation’s Research Center located at the National Institute of Standards and Technology (NIST) in Maryland. At the time he wrote the article, Bowen said he thought there should be restorative dental materials that would be more durable than the silicate cements and unfilled methyl methacrylate resins then available, but he didn’t know what his work would eventually lead to.

“Epoxy resins were reported to be strongly and durably adhesive to most materials. It seemed to me that a mixture of a maximum amount of amorphous silica combined with a minimum amount of self-curing epoxy resin might be used as a composition for the direct restoration of dental cavities,” Bowen said. “When I was working on this highly reinforced resin concept in the late 1950s and beyond, I had no idea as to whether such materials would turn out to become commercially produced and widely utilized.”

From 1953 to 1956, while practicing dentistry in San Diego, Bowen began conducting materials research in his spare time, using his screened-in porch as a makeshift laboratory. He wrote and presented a paper on the work, after which he was invited to join the American Dental Association’s Research Unit, then associated with the National Bureau of Standards in Washington, D.C., by George Paffenbarger (for whom the Paffenbarger Research Center would be named). 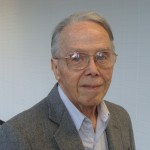 “The dental school prepared me to practice dentistry, but it was also influential in training for paying attention to fine details, which would later be essential in scientific endeavors,” Bowen said. “The clinical staff was especially influential because of their high standards with respect to ideal restorative procedures.”

“Before then, there weren’t a lot of things that dentistry could do,” Slavkin said.

Beyond Bowen’s revolutionary work with composite restorative materials, he is also credited with the invention of dental sealants used to prevent decay. His far-reaching impact on the profession led to several honors, including his induction to the Ostrow School of Dentistry Hall of Fame in 1997.

Slavkin cited Bowen’s long career as a testament to the importance of translational science.

“When you support basic science discoveries and put them together for dental applications, you have clinical practices that are informed by science and evidence,” he said.

Avishai Sadan has been named dean of the USC School of Dentistry, effective Aug. 1. The appointment was announced on behalf of USC President Steven B. Sample by Executive Vice President and Provost C. L. Max Nikias.