Building on the momentum of the Los Angeles Kings’ first Stanley Cup win in 2012, a USC Marshall School of Business marketing class found promoting hockey in the balmy climes of Southern California to be a worthy challenge.

As participants in Fox Creative University, which enlists students from top universities around the country to work on real-world projects as part of their academic curriculum, students were charged with raising the profile of the sport in the region and helping promote the rivalry between the Kings and Anaheim Ducks. 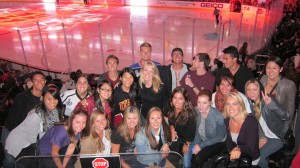 USC Marshall students got a taste of professional hockey when they attended a Kings-Ducks game at Staples Center. (Photo/courtesy of USC Marshall)

Assistant Professor Lisa Cavanaugh, who has enlisted students each year to work with other clients on real-world communications plans for her “Advertising and Promotion Management” class, was approached to collaborate on the project by Fox Sports executives Lindsay Amstutz, vice president of marketing for Fox Sports Regional Sports Networks, and Christina Appleton, manager of strategic partnerships for Fox Sports. The Fox Creative University program, currently in 20 schools across the country, is in its sixth year with USC and its first year with USC Marshall.

“My goal was to identify a unique integrated marketing and communications challenge that fosters an excellent learning and professional growth opportunity for my students,” Cavanaugh said. “This year’s challenge will stretch them creatively and allow them to have a positive and tangible impact on Fox Sports, the LA Kings and Anaheim Ducks.”

This semester’s project began on Sept. 11 with Fox Sports, Kings and Ducks representatives coming to Cavanaugh’s class to answer questions and talk about their brands and marketing campaigns. The project will culminate with student teams pitching their marketing communications plan in November.

Students got a taste of professional hockey when they attended a Kings-Ducks game at Staples Center in September.

“That was my biggest eye-opening experience,” said Elizabeth Dinh, who attended her first hockey game. “It helped me realize how to market the game better as a community sport because there were people with children attending who were so devoted to hockey. I’ve never experienced anything quite as encompassing as this project.”

“Before we even came out for the kickoff, Professor Cavanaugh had established a Twitter hashtag for her class. She already had the students engaged on social media, sending questions and tweeting, and it was clear how excited they were,” Appleton said. “I was very impressed. That’s just the best possible thing for the program. You get from it what you put into it. We’re all really excited about what we’re going to see in November from this class.”

A Marketing Class That Means Business