“A typical pattern is that people take the drug, they go into remission for a while and then, after a certain time, the cancer comes back. And now it’s a cancer on steroids. It ignores the drug and creates a worse threat for the patient’s health,” said Charles McKenna, professor of chemistry, pharmacology and pharmaceutical sciences, and vice dean for natural sciences for the USC Dornsife College of Letters, Arts and Sciences.

The problem is that the cancer cells figure out how to overcome or circumvent the drug, McKenna explained. To do this, the cells can employ a repair mechanism involving an enzyme known as DNA polymerase beta.

“The cancer may manipulate this enzyme to its own advantage in overcoming conventional chemotherapy,” McKenna said. “Some cancer drugs damage the DNA of cancer cells, but if the cancer cell can repair the damage, the drugs no longer have an effect. If you took this defense away from the cancer cell, then it would still be sensitive to existing drugs.”

For the past nine years, McKenna and USC Dornsife’s Myron Goodman, professor of biological sciences and chemistry, have been studying how DNA polymerase beta functions with the goal of finding a way to block it in cancer cells. 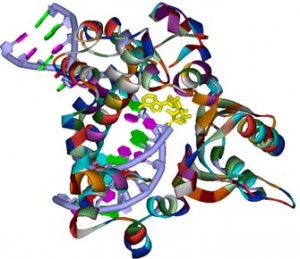 The repair enzyme DNA polymerase beta contains an inhibitor molecule which forms a complex with DNA. It is designed to selectively block polymerase beta DNA synthesis to kill cancer cells, while ensuring survival of normal cells. (Photo/courtesy of Boris Kashemirov)

As mutations in DNA polymerase beta have been associated with a variety of cancers, Goodman and McKenna are also investigating whether selectively inhibiting the enzyme will affect the development of cancer cells.

Now a new $6 million grant from the National Institutes of Health (NIH) will allow McKenna and Goodman to forge ahead with their groundbreaking research for the next five years, enabling them to develop critical new approaches to understanding cancer mechanisms.

“This is a very exciting project for us intellectually and scientifically,” McKenna said. “At the same time it has important implications for cancer research and hopefully ultimately for improving the effectiveness of cancer chemotherapy.”

“The program officer said it was probably the most favorable review he had heard in the last decade,” Goodman noted.

“I think this is an extraordinary example of success in getting a grant under very adverse conditions,” McKenna said. “Due to federal sequestration, the number and amounts of available research grants are being cut, with many investigators unfortunately losing their long-term funding.” 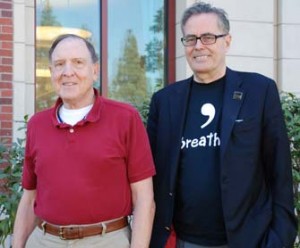 Myron Goodman and Charles McKenna are the recipients of the $6 million research grant from the National Institutes of Health. (USC Photo/Susan Bell)

Goodman and McKenna’s research models enzymes that synthesize DNA from a scientific perspective in order to understand the mechanisms of how the process works. They are particularly concerned with the fidelity of DNA synthesis — how do the enzymes make “the right choices” during synthesis. The stakes are high.

“If these enzymes make mistakes while repairing damaged DNA, the result may be cancer,” Goodman said.

“We know there are a variety of mutations in basic excision repair enzymes like DNA polymerase beta that are involved in a whole range of cancers,” he explained. “We want to find out if we can inhibit that enzyme under certain circumstances so we can avoid the development of cancer.

“We’re not saying these enzymes cause the cancer, but it just so happens they are around, so they are suspects in the crime,” he added. “If you don’t know who robbed the store, but you keep seeing the same guys hanging around the places that get robbed then you get the idea that maybe they are involved.”

McKenna is synthesizing so-called “scaffold compounds” which are designed to bind to the enzyme and inhibit a particular amino acid required by the enzyme for DNA synthesis. In this way, the amino acid can be selectively inhibited to turn off those enzymes that repair damage to cancer cells.

“We want to kill the cancer cells in a way that doesn’t inhibit normal enzymes in normal cells,” Goodman said. “It’s an extremely narrow perspective which the NIH is very excited about. In contrast with the small molecule screen currently being undertaken by the NIH in which literally hundreds of thousands upon millions of compounds are screened to see what might work, our project is using computer technology to help us develop intelligent, and highly targeted, design solutions.”

Goodman and McKenna’s research project is an interdisciplinary collaboration among experts in multiple domains. With Goodman as principal investigator, the project includes contributors from universities and institutes from across the nation providing expertise in fields including structural biology, biochemistry, organic and inorganic chemistry, and theory.

One major investigator in the program is theoretician Arieh Warshel, Nobel laureate, Distinguished Professor of Chemistry at USC Dornsife and a founder of the field of computational biophysics, who leads a project involving computer analysis to create mathematical models of DNA polymerases and their interactions distinguishing “right” from “wrong” repair of DNA. Warshel was recently awarded the 2013 Nobel Prize in chemistry based on his pioneering computational studies of enzyme mechanisms, which are being applied to understand the fidelity of the enzymes in the current research project.

G.K. Surya Prakash, holder of the George A. and Judith A. Olah Nobel Laureate Chair in Hydrocarbon Chemistry, professor of chemistry and director of the USC Loker Hydrocarbon Research Institute, has contributed to Goodman and McKenna’s study of synthetic probes for the enzymes.

Both Goodman and McKenna said the project serves as a wonderful training ground for graduate and postdoctoral students.

Goodman organizes once or twice-yearly retreats for everybody involved in the project, allowing professors, postdocs and graduate students to come together to discuss their latest findings.

“We also have a scientific advisory committee made up of some of the best people in the world, who come to these retreats and talk to us and that’s really very nice,” Goodman said.

“I’ve had students who have gone through the project, based their PhD thesis on it and have then found great jobs as postdocs or in industry,” McKenna said. “It’s clear they feel this project has provided them with tremendous opportunities for professional development and going to these retreats has been a very important part of that.”

In the next five years, Goodman and McKenna intend to find a way to selectively knock out DNA polymerase beta without damaging other DNA polymerase that are involved in DNA replications as opposed to DNA repair.

“That would be a major breakthrough because it could lead the way to novel therapeutic cancer treatments,” Goodman said.

“Although we are conducting academic research in which we are trying to understand the mechanism of this complex enzyme,” McKenna said, “we have this goal constantly in mind that our research could lead to better cancer therapy.”