George Olah and G.K. Surya Prakash PhD ’78, pillars of the chemistry department at the USC Dornsife College of Letters, Arts and Sciences, have received a first-ever $1 million prize from the State of Israel for their innovative research on alternative fuels.

Olah, a Nobel laureate and Distinguished Professor of Chemistry, and Prakash, professor of chemistry and director of the USC Loker Hydrocarbon Research Institute, will receive the Eric and Sheila Samson Prime Minister’s Prize for Innovation in Alternative Fuels for Transportation.

“The pioneering and exceptional work of Distinguished Professor Olah and Professor Prakash has brought tremendous honor to USC,” said USC President C. L. Max Nikias. “Their long-standing research has significantly advanced methanol markets and has helped the world develop viable alternatives to fossil fuels, which has important applications for transportation and other areas. This prestigious award also speaks to USC’s long-standing commitment to supporting consequential research, particularly in the areas of science and technology.” 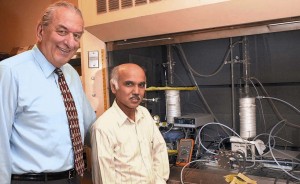 George Olah and G.K. Surya Prakash received the award in recognition of their proposal to use methanol to replace fossil fuels and petroleum-based feedstocks.

USC Dornsife Dean Steve A. Kay added: “Professors Olah and Prakash’s amazing vision for methanol fuel as an alternative source of power for everything from cellphones to cars to homes will continue to flourish with this tremendous award, which will help them move one step closer to reducing our dependence on fossil fuels. We are incredibly proud to support their work and that of the researchers of the Loker Hydrocarbon Research Institute, housed in USC Dornsife.”

The award is given in recognition of their work on the methanol economy, a proposal to use methanol to replace fossil fuels and petroleum-based feedstocks. Though methanol can be produced from fossil fuels, it can also be produced from renewable resources, such as agricultural waste products. It also has the potential to be generated by recycling atmospheric carbon dioxide — setting up the possibility of a carbon-neutral fuel source. The Wall Street Journal published an op-ed by Olah and USC Trustee Chris Cox on the methanol economy in its Oct. 10 issue.

“Basically, it should be able to replace oil,” Olah said. “With my friend and colleague, Dr. Prakash, we’ve worked very hard on this research. … I never thought to live long enough to see it gaining practical acceptance.”

Olah has described his work on developing an anthropogenic carbon cycle — that is, a way to recycle carbon dioxide into fuel — as the most important work of his career, eclipsing even his work on superacids and his observations of carbocations, which earned him a Nobel Prize in chemistry in 1994.

“Methanol is the fuel of the future,” Prakash said. “Dr. Olah and I are honored and humbled by this award. We have been working on this for 30 years — and for a scientist, it’s always ‘we,’ never ‘I.’ There have been countless grad students and postdocs who have contributed to this work along the way.”

Olah became the founding director of the Loker Institute in 1977 and guided the facility as it became a powerhouse of technological advancements. The institute has trained more than 600 doctoral and postdoctoral fellows and has produced more than 1,600 citations in technical journals, monographs and books. More than 100 patents have been issued based on discoveries from the institute, many of which have been licensed and commercialized, particularly in the areas of fuel cells, gas production and the methanol economy.

Prakash, who arrived at USC in 1977 as one of Olah’s graduate students and obtained his PhD from USC Dornsife, now runs the Loker Institute and is an award-winning pioneer in the fields of hydrocarbon, mechanistic and synthetic organic chemistry.

Olah and Prakash are the inaugural recipients of the award, which was created by the Israeli prime minister’s office, together with the Israeli ministry of science and technology and Keren Hayesod-United Israel Appeal. The award aims to support an initiative launched by Prime Minister Benjamin Netanyahu in 2011 to reduce Israel’s dependence on foreign oil.

Netanyahu will present the USC scientists at the Bloomberg Fuel Choices Summit in Tel Aviv in November.

Eric and Sheila Samson, the namesake of the award, are philanthropists and permanent residents of Israel.

Building a Way to Save Energy

Buildings have lives – they are active, and they sleep. They have different personalities and different attractions for occupants.