Petraeus, whose current interests include how energy, information technology, life sciences and manufacturing revolutions will spur the North American economy, was impressed with the latest Trojan technology — robotic fingers that give machines a humanlike touch and the testimony of Holocaust survivors brought to life through 3-D technology.

Petraeus, who constructed the counterinsurgency doctrine that stabilized Iraq under U.S. and allied forces and later served as director of the CIA, joined USC’s faculty this fall as Judge Widney Professor.

Petraeus’ first stop on campus was opening a national conference hosted by the USC Price School of Public Policy on the needs of military veterans returning from war. There, LA Mayor Eric Garcetti made his first official visit to campus and announced plans to establish a new Office of Veterans Affairs for the city. 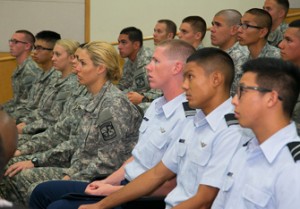 Members of the USC Veterans Association listen to a talk given by Petraeus. (USC Photo/Tom Queally)

Over lunch with members of USC Veterans Association — for which Petraeus is faculty adviser — Petraeus said he decided in part to teach at USC because he saw how highly the university valued its service members. USC currently has 875 veterans enrolled, and the Trojan ROTC program, which is administered through USC Price, includes 120 students.

“USC is in the middle of a surge,” Petraeus said, noting the university’s rise in prominence. “USC has a great faculty, great students and the weather’s fantastic. It’s hard to beat.”

Petraeus toured the USC National Center for Risk and Economic Analysis of Terrorism Events at Tutor Hall, where Professor Milind Tambe has developed software to randomize the time and location of police patrols, now used as a counterterrorism measure by agencies across the country.

He also met with researchers from the Center for Innovation and Research on Veterans & Military Families, which with the Institute for Creative Technologies has developed a virtual human avatar to train USC School of Social Work students on the unique needs of veterans and their families.

Petraeus also drew on his research interests — he earned a PhD from Princeton University in international relations — during a guest lecture at the USC Sidney Harman Academy for Polymathic Study in Doheny Memorial Library.

Moderated by USC University Professor Kevin Starr, an Army veteran, Petraeus led a discussion on four revolutions in energy, information technology, manufacturing and life sciences that he believes will boost the U.S. economy in the decades to come.

They are all interconnected: the energy revolution and low-cost natural gas fuels the IT revolution and cloud computing, spurring a manufacturing revolution, such as the three-dimensional printing technologies of the USC Viterbi School of Engineering. Rather than printing ink onto paper, this technology stacks up layers of living material into 3-D shapes and will help spur advances in life sciences by creating replacement human organs using a person’s own cells.

“This is coming soon to a theater near us,” Petraeus said, “this is not fantasy.”

Petraeus also lectured to the inaugural class of Master of Business for Veterans students and answered questions about transitioning to a life as a civilian. The group of 39 veterans and active-duty military members are the first to participate in the yearlong degree program at the USC Marshall School of Business that will help them launch business careers.

“An enormous percentage of our veterans — especially after the experiences of the last decade — have discipline, appreciation for the blessings of life, extraordinary experience and expertise and a degree of determination to take advantage of the opportunities that they have,” Petraeus said. “You are part of that cohort … and I know that you will make the most of it.”

He left the post-9/11 veterans with perhaps the most impressive title of all.

“I’m already convinced that you are America’s new Greatest Generation,” he said.

Petraeus leads a surge across campus