Each year thousands of veterans come home from Iraq, Afghanistan and other places facing the difficulty of assimilating back into civilian life. The USC Price School of Public Policy hosted a conference Oct. 8 on the University Park Campus to address the urgent needs of returning veterans.

USC Price Dean Jack H. Knott noted that providing excellent veteran services and expanding scholarships for student veterans are USC priorities. The school is preparing to launch a major initiative to support policy research on issues directly related to the needs of returning veterans, such as workforce development, homelessness and community health.

“We will work with other schools to offer veterans education and technical training programs that can translate their military training and skill set into a promising career,” Knott said. “There may be no nobler a cause than to work with, engage with and serve those individuals who have sacrificed so much in service of our country and all of us. By offering this forum, we have the opportunity to advance dialogue and bring together thought leaders who can make a real and vital difference for our veterans.”

Petraeus, a former four-star U.S. Army general who constructed the counterinsurgency doctrine that stabilized Iraq under U.S. and allied forces and later served as director of the CIA, joined USC’s faculty this fall as Judge Widney Professor, which includes a joint appointment at USC Price.

Petraeus described the post-9/11 generation of veterans as America’s greatest new generation, a group who has served longer duties of combat than ever before. More than two million military men and women, all volunteers, served in Iraq and Afghanistan.

“While our country continues to improve its support for and recognition of our veterans and their families, we can and should do more,” Petraeus said.

He laid out our obligations to veterans as fourfold: to look after the families of fallen heroes; to take care of wounded service members; to help veterans transition successfully to the civilian sector; and to recognize their service. 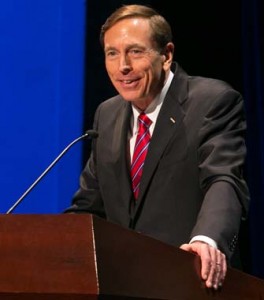 Petraeus says “there is a clear and critical need for the right transition programs” for veterans. (USC Photo/Tom Queally)

“As the veterans in this audience know, hanging up the uniform and leaving ones’ comrades and military life is often very difficult,” Petraeus said. “Neither going back to school nor entering the civil workforce is as easy as it might seem. There is a clear and critical need for the right transition programs, college refresher courses, job-skills training, transition mentoring and assistance programs for veterans struggling with persistent unemployment and, in some cases, homelessness.”

Jacob Wood, president and co-founder of Team Rubicon, delivered the morning’s keynote address, which spotlighted the powerful role that service and community can have in reintegrating veterans back into civilian life.

Realizing that natural disasters such as the 2010 earthquake in Haiti present many of the same problems that confront troops in Iraq and Afghanistan, Wood helped establish Team Rubicon, a nonprofit that recruits military veterans to volunteer for rapid-response disaster relief teams in the United States and around the world. Last year, Team Rubicon deployed more than 400 veterans to help in recovery from Hurricane Sandy.

“Disasters provide a unique opportunity for our veterans to continue their service in a capacity that takes them out of warfare and puts them in situations where they can help,” Wood said. “Veterans are able to take the skills they learned in the military — skills like small-unit leadership, risk management, emergency medicine and even heavy equipment operation — and apply those skills in disaster response to make problems better.”

Through their volunteer efforts, these veterans gain a renewed sense of purpose while remaining in a supportive community of fellow veterans who can help them transition back into civilian life.

During his lunchtime remarks, Garcetti announced plans to establish a new Office of Veterans Affairs within the city of Los Angeles. He called it unacceptable to have a single veteran homeless in the city.

Garcetti, who serves as a lieutenant in the U.S. Naval Reserve, said that 120,000 veterans call Los Angeles home and that the number is projected to increase another 60,000 by 2017, making immediate action on this issue vital.

“Whether it was ourselves, a mother or father, aunt, uncle or grandparent, we know those who have served that allow us to be here today,” said Garcetti, whose grandfather Salvador Garcetti served in the U.S. Army during World War II. “Let us take that seriously with more than words, but with our deeds and our actions, and let LA shine forth to the rest of the country what we can do for our great veterans.”

“USC is such a natural place for the military and our veterans for one simple reason — we are all committed to lives of service and leadership that benefit our neighbors and our nation,” Nikias said.

The conference featured three sessions of discussions on areas essential to improving the lives of returning veterans.

The day’s first panel was a candid talk featuring four veterans who offered personal stories about their difficulties with reintegration. The discussion was moderated by retired Brigadier Gen. Bill Bester, who is a senior adviser at the Jonas Veterans Healthcare Program. Panelists included U.S. Army Col. Carl Castro, director of research at the USC School of Social Work’s Center for Innovation and Research on Veterans & Military Families, as well as Shanita Seamans, Justin Wood and Jim Zenner from Volunteers of America.

Another panel — moderated by William Ahmanson, president of the Ahmanson Foundation — focused on workforce development and on dispelling the myth of post-traumatic stress disorder. The speakers included Kyle Hausmann-Stokes, founder of Veterans in Film & Television; Chris Marvin from the Got Your 6 campaign; Tim Norman of DreamWorks Animation; and Raymond Weeks with Prudential’s Veterans Initiatives.

Marge explained that housing is “the first critical step to stability.”

“For someone sleeping out on the streets, their most pressing need is not a job, is not getting clean and sober,” she said, “it’s getting into a home.”

“I think the first message has to be to tell them, ‘You’re not damaged, you’re not sick, there’s no deficit here. Maybe you’ve gone through a hard time, but you’re innately healthy and success for you is right around the corner.’ ”

The speakers were all in accord that more needs to be done to keep veterans off the streets.

Bostic, who previously served in the Obama Administration as assistant secretary for policy development and research at the U.S. Department of Housing and Urban Development, indicated that veteran housing was one of the few issues that consistently found bipartisan support.

“Because of changes in technology and how we do our war, more people are coming back, which means the veterans issue is only going to grow,” Bostic said. “We have to figure out a way to serve these patriots of ours in ways that allow them to return to society, reintegrate and get all the supports that they deserve.”

To conclude the conference, USC Price’s Schwarzenegger Institute for State and Global Policy hosted a special screening of the HBO documentary, Alive Day Memories: Home From Iraq. Ret. Capt. Dawn Halfaker, who was featured in the film, along with producers Matthew O’Neill and Jon Alpert, took part in a panel and Q&A following the screening. The discussion was moderated by retired Maj. Gen. Peter Gravett, secretary of veterans affairs for the state of California.

The conference was funded in part by Barbara and Donald Jonas of the Jonas Veterans Healthcare Program. Additional support was provided by the School of Social Work, Bill and Mary DeWitt, Got Your 6, the USC Price Athenian Society, the Bedrosian Center on Governance and Public Enterprise and the USC Schwarzenegger Institute.