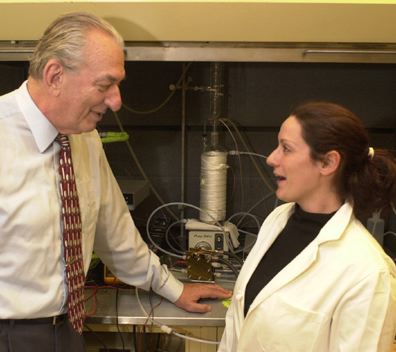 George Olah talks with Kimberly McGrath, a graduate student in chemistry. Between them is a methanol fuel cell.

“We will solve today’s electricity problem,” Nobel Laureate George Olah says. “But we face a long-term environmental and energy crisis. In a decade or two, people will be up in arms asking why we haven’t built sufficient power plants. Based on what we know now, only atomic power plants – albeit safe ones – can fill the void caused by diminishing fossil fuel resources.”

In a new book, Olah, a USC distinguished professor of chemistry, lays out his views on energy and the environment.

Start with the fuel cell.

Olah emphasizes the significance of fuel cells and related research at the USC Donald P. and Katherine B. Loker Hydrocarbon Research Institute, which he directs. Fuel cells change chemical energy into electrical energy. Most fuel cells today produce electricity by combining hydrogen and oxygen in the presence of a platinum catalyst to form water.

Hydrogen, however, is an explosive gas that is difficult to handle. Hydrogen diffuses through most materials, requiring containers that are heavy and expensive.

“Ninety-nine percent of the weight of a tank of hydrogen is the tank itself,” said Surya Prakash, holder of the George A. and Judith A. Olah Nobel Laureate Chair in Hydrocarbon Chemistry and scientific co-director of the Loker Institute.

Prakash and Olah, in cooperation with the Jet Propulsion Laboratory at Caltech, have developed a revolutionary fuel cell based on methanol, or methyl alcohol, instead of hydrogen.

The Direct Methanol Fuel Cell utilizes a special membrane coated on both sides with different noble metal catalysts. On one side of the membrane is methanol and water. On the other side, either oxygen or air is bubbled through. The catalysts break the methanol and water apart into carbon dioxide, hydrogen ions and electrons. Positively charged hydrogen ions migrate through the membrane to link up with oxygen atoms to form more water, while the electrons move through a circuit to produce electricity.

USC and Caltech/JPL patented the methanol fuel cell in 1997. Prakash said the fuel cells are suitable for large and small applications ranging from small devices such as cell phones, using only a few watts, up to trucks, buses and even trains requiring hundreds of kilowatts of power. One company that has licensed the technology, Ballard Power Systems, demonstrated a car with a 3-kilowatt methanol fuel cell this year at the Stuttgart Auto Show. Researchers at Loker are currently developing a portable 150-watt methanol fuel cell device for the Department of Defense to recharge batteries.

Methanol fuel cells are almost 40 percent efficient – twice the efficiency of internal combustion engines – and are likely to improve. They are cooler, operating below the boiling point of water, Prakash said. They emit only water and carbon dioxide.

“Methanol, in our opinion, can be the fuel of the future. It is easy to produce, transport and store, and it is much safer than hydrogen,” Prakash said. Natural gas from oil wells, which is mainly methane and was once flared (burned) because it was too much trouble to capture, is now routinely converted into methanol. “So methanol is relatively cheap, and will get cheaper. It is already one of the top five bulk chemicals in the world; however, we still rely on natural gas or coal for its production.”

But you don’t need methane to make methanol, Olah explained. With sufficient cheap energy to generate hydrogen by electrolysis of water, you can make methanol utilizing carbon dioxide from the atmosphere. In principle, carbon dioxide and water can also be directly electrochemically reduced to methanol. Methanol can also be converted to higher hydrocarbons. These are, however, not commercially viable processes because they require much energy, but Loker scientists are exploring those conversions in their research laboratories. Olah believes that such chemistry might also solve the problem of global warming caused by the buildup of carbon dioxide in the atmosphere.

“Although I may be somewhat of a visionary, I see a solution to the problem by chemical recycling of excess carbon dioxide emissions into methyl alcohol and derived hydrocarbon products,” Olah writes in his book. “To achieve it in an environmentally friendly and practical way represents a major challenge.”

While it is easy for plants to find the tiny fraction of carbon dioxide in the atmosphere for photosynthesis, to achieve it by physical or chemical separation techniques is no easy task.

“There is a heavy concentration of carbon dioxide in power plant smokestacks, from which its separation is feasible,” said Tony Atti, a postdoctoral fellow at Loker. “And during off-peak periods, there is a surplus of power available.”

Olah, Prakash and other Loker scientists are trying to create the technology to recycle carbon dioxide from power plant stacks into methanol for fuel cells. These could replace today’s internal combustion engines and inefficient batteries. Methanol could also become a feed stock for the chemical industry and, at the same time, reduce the main greenhouse gas that causes global warming — carbon dioxide.

“We can create a new energy cycle based on methanol and carbon dioxide,” Prakash said. “This new ‘one-carbon chemistry’ is the most elementary organic chemistry.”

“Fossil fuels are dirty and inefficient,” said Atti, “and they are not renewable.”

Olah notes that the world’s population is currently 6 billion and heading for about 10 billion by the middle of this century. This, together with mankind’s desire for a higher standard of living, puts additional pressure on Earth’s limited resources.

“New and more efficient ways are needed to satisfy demands so that a reasonable standard of living can be provided for all,” he writes in his .new book. Olah does not believe that sufficient alternative “green” energy (such as wind and solar) will be able to meet the world’s power needs when fossil fuels begin to run low and grow prohibitively expensive.

That leaves nuclear energy as the only reasonable alternative, Olah said, but serious problems of nuclear waste and safety remain to be solved.

“Given the will and the resources, we can solve those problems,” Olah said. “I do not think we should be the generation that leaves the Earth as an inhospitable home for our children.”

(George Olah won the 1994 Nobel Prize in chemistry for his research on superacids. He holds the Donald P. and Katherine B. Loker Chair in Organic Chemistry in the USC College of Letters, Arts and Sciences. His new book is A Life of Magic Chemistry: Autobiographical Reflections of a Nobel Prize Winner. John Wiley & Sons, 2000. At the American Chemical Society national meeting in San Diego, April 1-5, Olah will receive the Arthur C. Cope Award for outstanding achievement in the field of organic chemistry.)