The complex story of Ruben Salazar was brought to life last month at the USC Annenberg School for Communication and Journalism during a packed screening of a documentary directed and produced by USC Annenberg fellow Phillip Rodriguez.

USC Visions and Voices presented the event, which included a panel discussion after the screening with an audience of Salazar’s friends, Chicano activists and longtime Angelenos who are familiar with his controversial death.

Ruben Salazar: Man in the Middle peels back the layers of Salazar’s multifaceted life as a Mexican-American journalist and symbol of the Chicano civil rights movement. The film also chronicles the filmmakers’ investigation into the events surrounding Salazar’s death in 1970 when he was killed by a Los Angeles County sheriff’s deputy, as well as their successful bid to acquire public records focusing on the investigation of his demise.

The film is scheduled to air next year on PBS. Rodriguez and his co-producer, Jennifer Kobzik, plan to enter the documentary into film festivals and to offer additional screenings at schools and libraries.

“This story of Salazar had been considered to be a regional and ethnic story,” Rodriguez told the audience after the USC Annenberg screening. “And I thought it was a big American story. We’re putting it on prime time [for PBS], so people in Green Bay, Wis., and across the nation will have the opportunity to learn a little more about what the Mexican-American experience has been.”

The film is a capstone to an ongoing USC project to recount the life of Salazar, a former columnist for the Los Angeles Times and news director for television station KMEX. USC Annenberg students and faculty members, in partnership with the USC Libraries, negotiated the release of his personal archives — 10 boxes of memorabilia and writings dating back to his birth in Mexico in 1928. The items were curated, digitized and inserted by students into an image-rich timeline called the Ruben Salazar Project.

That project and the film attempt to etch a full portrait of Salazar’s life. The movie interweaves family photos, newspaper clippings, KMEX video and glimpses of his handwritten, personal writings to fill in the gaps of Salazar’s early life — including his family’s move from Mexico to Texas and on to his first job. The film related one of the first stories he wrote as a professional journalist: At the El Paso Herald-Post in 1955, he pretended to be drunk in public so he could be arrested and report on conditions of the city jail. (The tale drew appreciative chuckles from the screening’s audience.)

Salazar lived and worked in Northern California before moving to the Los Angeles Times in 1959. He eventually became a foreign correspondent and covered Mexico City and the Vietnam War. He returned to Los Angeles in 1969 to cover the growing Chicano movement.

Later in his career, his voice emerged as a supporter of the Chicano movement, and he spoke out against civil rights violations and inequality faced by the community. 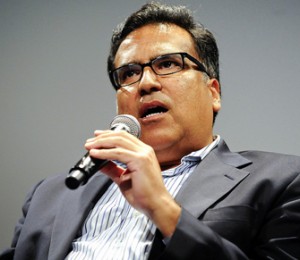 “He’s a mid-century Mexican-American who had assimilated to Anglo norms, which is what people did in those days,” Rodriguez said. “Then, in midlife, he confronts this new nationalist movement among minorities. And this movement, which he’s asked to report on, forces him to answer questions about his own choices.”

A running theme of the film, Rodriguez said, is that transition. The idea was to delve beyond Salazar’s role as a symbol of the Chicano movement.

“On some levels it’s a murder mystery,” he explained, “but it’s also a very personal story about an internal struggle and self-reinvention. And that’s pretty poignant.”

As for the mystery, filmmakers partnered with the Mexican American Legal Defense Fund (MALDEF) to file a lawsuit that opened up law enforcement records in an effort to shed light on the circumstances of Salazar’s death. The filmmakers also discovered that the U.S. Department of Justice had conducted an independent, secret investigation but found no evidence that his death was more than an accident.

Salazar had reported being visited by Los Angeles police officers and being summoned to the LA police chief’s office after some of his stories appeared in the LA Times. Soon after, Salazar was killed during the National Chicano Moratorium March against the Vietnam War. LA County sheriff’s deputy Tom Wilson, standing outside a bar, fired a tear-gas canister that struck Salazar while he was inside the building with friends.

The film includes interviews with witnesses and Wilson himself, along with the LA County Office of Independent Review.

“The LA Times did an exhaustive job of reporting on the case, shortly after his death,” Rodriguez said. “But in those days, law enforcement was really unaccountable to the extreme. There was only so much a reporter could find out.”

Salazar’s daughters, Lisa and Stephanie Salazar, attended the screening along with journalists and friends of Salazar who are featured in the film. Lisa Salazar thanked the filmmakers, saying that the film allows her father “to represent himself.”

Audience members, many of whom were members of the Chicano movement or who otherwise remembered Salazar’s influence, were eager to ask questions of panelists Rodriguez; George Sanchez, professor of American studies and ethnicity and history at the USC Dornsife College of Letters, Arts and Sciences; and Thomas Saenz, president and general counsel of MALDEF. The panel was moderated by Yvette Cabrera, president of CCNMA: Latino Journalists of California.

“I think films like this don’t come that often, and that’s why there is such a big turnout,” said Manuel Huerta of the East Side Heritage Consortium. “It’s exciting to see something that’s about a figure a lot of people know about and to get a more humanized view of his life.”

In 1973, USC hosted the Festival de Flor y Canto (festival of flower and song, named after the Aztec word for poetry), a three-day event that featured dozens of emerging Mexican-American poets and writers.

Documentary on Soviet-era Art to Debut

“I found these paintings rolled up under the beds of old widows, buried in family trash. These were forbidden works, by artists who stayed true to their vision at a terrible cost.

A documentary with the power to save lives

Hole in the Head: A Life Revealed that tells the shocking and inspiring life story of Vertus Hardiman, the victim of a horrifying medical experiment.

The PEER mentoring program has been key in helping first-year Asian American, Pacific Islander and Desi American students transition to college and find community at USC.

Man in the Middle recalls career of journalist Ruben Salazar