Truth be told, most public radio membership drives are barely tolerated by listeners. But at Classical KUSC, where the fall membership drive kicks off Oct. 10, many listeners actually look forward to the drives. The listeners particularly look forward to the kickoff and finale when announcers Rich Capparela and Jim Svejda team up for what aficionados call “vaudeville of the air.”

In a normal week, the two announcers, who are among the nation’s best-known and most knowledgeable commentators on classical music, host separate shows on Classical KUSC. But from 4 to 7 p.m. the first and last day of each membership drive, Capparela and Svejda join forces and let the musical jokes, puns and humorous asides fly. For the fall drive, they will team up on Oct. 10 and Oct. 18.

“They put a lot more of their own humor into these hours,” said station General Manager Eric DeWeese. “We know there are people who tune in specifically to hear them.”

Svejda and Capparela claim to be mystified about why listeners tune in to hear them co-host.

“I’d credit Jim with being flawlessly focused and easy to interact with on air,” Capparela said. “But beyond that, there’s some chemistry going on between us that is a mystery to me.

“It’s a little like that storied married couple who finish each other’s sentences. … I dare not ask more, lest I tip over the apple cart,” he added. “We do get great feedback, especially when one of us inevitably cracks up the other and that person falls into helpless giggling.”

DeWeese said the station also gets positive feedback from listeners during membership drives on The Opera Show With Duff Murphy, when Svejda joins Murphy in the booth for clever repartee. That duo will be broadcasting from 9 a.m. to noon on Oct. 12, talking between excerpts from various operas. 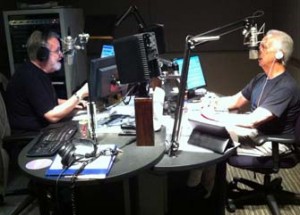 The station’s membership drives are vitally important, as about 70 percent of Classical KUSC’s operating budget comes from individual donors.

DeWeese, who organizes the membership drives with Minnie Prince, the station’s director of development, said that several of the thank-you gifts given to donors have proven so popular that they are offered drive after drive.

The longest-running gift, offered annually for nearly two decades, is a recording of George Gershwin’s “Rhapsody in Blue” recorded by Mitch Miller.

So far, he has been able to sit on his wallet.

“I do the hype-and hyperbole-proof guarantee on most things and have never gotten stung yet,” Svejda said.

DeWeese said the challenge of membership drives is to keep the messages positive so listeners enjoy the increased time spent on conversation.

“We don’t want to make people feel guilty or listen to begging,” he said. “Listeners tell us they like learning more about our announcers and hearing their humorous sides.”

As director of arts programming, award-winning journalist Gail Eichenthal will oversee production of the station’s arts features and specials.

KUSC pledges to use humor in fall membership drive